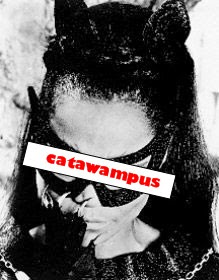 I thought I might start a "fun" new feature on this blog to encourage more reader activity. Instead of commenting on what I have to say about so-called neo-neo-realism, why not voice your opinion on something that's a lot less boring? Since my blog is dedicated to the cinema, I thought a free association of words and films would be an exciting new feature. Example: when you hear the word "lame," you might imagine a series of Robin Williams films. Better yet, you hear "voluptuous," you very well might think of Beyond the Valley of the Dolls. Or, if you're really filthy, The Little Mermaid. Hey, I don't judge. I just want some clever responses. I was going to choose dictionary.com's "word of the day" as the starter-offer, but their word was "impassive," and that word would describe just about my entire DVD collection. Instead, I chose the far more amusing adjective "catawampus." It was a mere coincidence that I chose a photo as Eartha Kitt (as Catwoman, no less) for the design. This'll help you out on your language skills, film knowledge, AND cleverness, so by all means, throw out some suggestions. Maybe Eartha Kitt in Ernest Scared Stupid comes to mind when you hear "catawampus," maybe not. 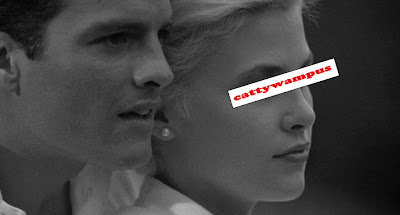 Posted by reassurance at 9:31 AM

ah! well it's funny you should mention catawampus because that word came into my life a couple of months ago in a very special way. while watching my favorite show "Cops" an officer of the law-if my stoner brain can recall anything at this point-somewhere in texas used this word to describe how things can sometimes get hairy while on the job when dealing with your average outlaws and miscreants. ever since i have had an absolute love affair with this word. my favorite thing about this word is that it truly accentuates and brings into full appreciation the various twangs one can choose from while speaking in a southern accent. my favorite way to pronounce catawampus is with the inflection of an old southern bell/debutante with lots of class and distinction in her voice. give it a go-i'm positive you won't find a more satisfactory experience.

I'm imagining myself as Sherilyn Fenn right now, with a really awful blonde dye job, resting the back of my hand on my forehead in the meadow in the movie Two Moon Junction -- already this has been a satisfactory experience.

It brings to mind the sensation of Halle Berry loading my asshole full of excess copies of the fullscreen DVD for "Catwoman."