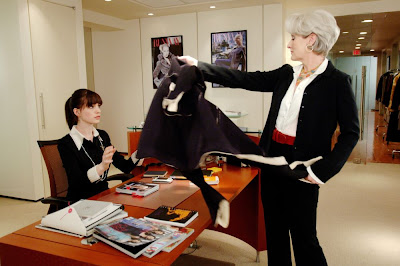 That The Devil Wears Prada is not a good film may not come as much of a surprise, but that The Devil Wears Prada features Meryl Streep in one of her most complex roles may. The film is rigidly formulaic: small-town girl with ambition arrives to the Big Apple to be swallowed whole. Yet sometimes a film can overcome its pitfalls and stand as something truly remarkable. The Devil Wears Prada could never be called boring, but it falls into the trappings of most conventional Hollywood films. Our protagonist Andy (Anne Hathaway) is so painfully idealistic that her very downfall and rebirth could be seen before even viewing the film. Plucky Andy, a size six, accidentally lands a job at Runway Magazine, the pinnacle of haute culture New York fashion, to gather references in her goal in becoming an important journalist. Stealing the job from the herds of more fashionably inclined young women, Andie becomes the assistant for the magazine’s maven (or Nazi, if you will) of glamour, Miranda Priestly (Streep). Miranda puts her new assistant through rings of fire, causing the naïve Andy to lose sight of what really matters in her life. Blah, blah, blah. You know what’s going to happen going into the film, so why bore you with plot details? The Devil Wears Prada is all about Meryl Streep and Marilyn Priestly, and I’ll spend the rest of this review talking about that. 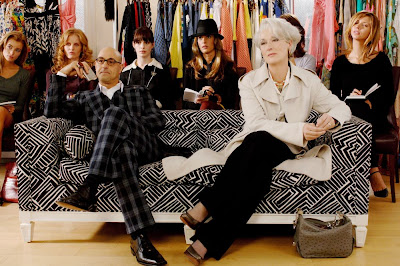 Streep’s top-billing over Hathaway has little to do with screen time as it does prestige. She’s easily the supporting character here, and this is all the better. Marilyn Priestly doesn’t exist so much as a character as she does a myth. Her actions are inhumane, her disposition cruel. With the combined force of David Frankel’s direction and Aline Brosh McKenna’s screenplay, based on the novel by Lauren Weisberger, Marilyn Priestly always stays firmly in the background, even when she’s mouthing cruel insults at her staff. She’s like Marlon Brando in Apocalypse Now, an ominous, impermeable figure, hidden in the shadows. We, the audience, like Andy, are never given the “in” on what sort of a person she might be when she’s not wearing her fashion like battle armor. With this positioning of Marilyn within the film, she becomes an eternally fascinating figure. While on a date talking with another fashion big wig (Simon Baker), Andy states exactly what should make Marilyn such a complex figure: she’s a woman in a man’s position, therefore being dubbed “ice queen” and “bitch” when words like “skillful” and “professional” would be attached to a man in her shoes. Granted, they wouldn’t look nearly as good. However, if this were simply it, the film would have become preachy and uninteresting. Instead, Marilyn becomes a figure of high intrigue and fascination, whether she be man or woman. The Devil Wears Prada may present itself as a piece of fluff, but you’d be surprised how much it has to say about the face and design of power and how richly fascinating a study that can be.
Posted by reassurance at 5:39 AM

Is this film not based on a book written by someone who actually lived this experience? Would you say then her life follows the Hollywood formula or are you always so cynical when it comes to films you feel follow a formula?

Because a film is based on someone's life events does not determine whether a film about these events will accurately depict what happens or adapt it into a digestible formula that audiences are familiar with. Take for instance Walk the Line and Ray; both films are based on the lives of two different people, yet follow an almost identical structure of storytelling. The Devil Wears Prada follows a very rigid formula of the bright-eyed newcomer who reaches successful in their given field with a price-tag that often leaves their friends and family in the dust. You can see this present in Boogie Nights, Valley of the Dolls, Fame, and even something like Requiem for a Dream. The price of power and fortune always comes at a cost to those who seek it out, or so Hollywood tells us.

I would also hardly say that I was cynical about the film, hence the praise I gave it.

You were cynical about the Hollywood formula I said

Who in their right cinematic mind isn't cynical about the Hollywood formula? As a screenwriting student, I'm extremely wary of falling into it simply because they TEACH formula. Yet without the overuse of Hollywood formula, other films that don't fit into it would likely feel less important and brilliant. It's a necessary evil, and occasionally you'll get something like Prada which works despite it.

It also bears mentioning that the book is a highly fictionalized version of someone's experience working at Vogue. A fictionalized account written by the "bright-eyed newcomer", and hardly a balanced view of the reality of the situation. The book is dreck, poorly-written chick-lit on par with "The Nanny Diaries." And her account absolutely follows the Hollywood formula, as most chick-lit does. In the end, the cynicism is well-deserved.