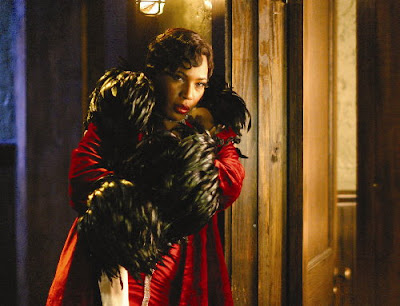 Here’s the bad news first. Macy Gray, as (surprise) a boozy lounge singer, does not come near matching her brilliant performance in Shadowboxer here. The good news? No chance for another Oscar nomination to cancel her out (though, really, who wouldn’t vote for her in Shadowboxer?) Actually, the real bad news about Idlewild has nothing to do with Macy Gray, but that the film is a total dud. The musical numbers may be snappy, but they’re also really run-of-the-mill. André Benjamin and Antwon “Big Boi” Patton might have made for charismatic leads in a far better production. I can’t tell you how many people would have much rather seen a film adaptation of Outkast’s Speakerboxxx and The Love Below than this undercooked Prohibition-era musical. 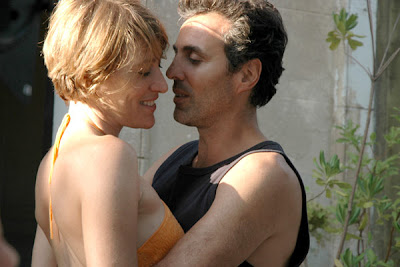 Why does the term French sex romp flow from the tongue so easily? Perhaps because all three words are synonymous with one another (though we could probably attach a whole different set of words with “French”). From the boys who brought us The Adventures of Félix (Drôle de Félix), My Life on Ice (Ma vraie vie à Rouen), and Jeanne and the Perfect Guy (Jeanne et le garçcon formidable), Cote d’Azur (or, literally, Seafood and Shellfish - with this and Le temps qui reste, Strand Releasing has a tendency to fuck up translations) finds an affluent family vacationing in the south of France. Béatrix (the lovely Valeria Bruni-Tedeschi) is the free-spirited young mother, terribly “tolerant” due to her Dutch family lineage as she constantly reassures her husband throughout the film. Her husband Marc (Gilbert Melki) is alternately tightly-wound, always keeping himself busy with Mr. Fix It projects. Their teenage son Charly (Romain Torres) has created a jerk-off chamber in the shower, frequently causing the hot water tank to run dry. There’s a teenage daughter as well, but she disappears in the first twenty minutes to fuck a dreamy motorcyclist in Portugal. Charly invites his gay friend Martin (Edouard Collin) to stay with the family, raising suspicions from his mother and father about his sexuality. As he’s coldly androgynous and closed off from his parents, Béatrix and Marc suspect he might be a little light in the loafers, which appears to affect them little. Ducastel and Martineau create such a wonderfully whimsical and refreshing world with Cote d’Azur, just as they did in their gentle and moving Félix; the world of Cote d’Azur is one without real consequences as the characters, especially Béatrix, seem to enjoy one another’s company so much that their fuck-ups really don’t matter. Bruni-Tedeschi, an Italian/French actress/director, really steals the film here, though the rest of the cast is quite good. Once her other lover shows up, Bruni-Tedeschi, sensuous and youthful, revel in her teenage-like affair. Sexual liaisons in Cote d’Azur are never depicted as dirty or wrong, even in the instance of extramarital affairs and gay cruising; instead, they blossom onscreen like fresh, exotic flowers. It may come as a surprise that the film has a striking depth about human and familial relations, but it certainly won’t surprise you when the entire cast breaks out in song and dance before the credits roll. 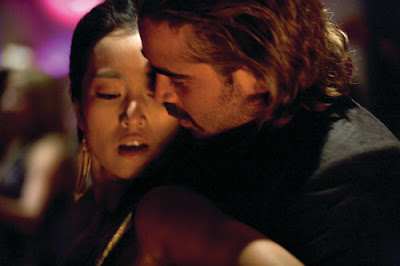 Your reservations in seeing a film adaptation of the now-silly Don Johnson television series, starring Colin Farrell and Jamie Foxx, are duly noted. But in the hands of Michael Mann, who co-wrote some episodes of the show, Miami Vice is actually one of the better films of the year. That Miami Vice isn’t as good as Mann’s Heat isn’t so much a criticism as an observation, as Heat was truly one of the finest films of the 1990s (and perhaps the last great film Pacino or De Niro will ever make). Foxx and Farrell play undercover cops, named the same from the television show but baring little resemblance to them in terms of character and even race. Really, you can forget that this film has anything to do with that TV show, because the similarities end there. The two cops, with the aid of the undercover team (28 Days Later’s Naomie Harris, Justin Theroux, Elizabeth Rodriguez, and Domenick Lombardozzi), try to find out what went wrong with a police sting that resulted in the death of two cops. The pair successfully make their way “in” with a Columbian drug trade, headed in part by the stunning and mysterious Isabella (Gong Li, impressive despite learning her lines phonetically). Mann has a way of crafting some of the most tense and raw sequences you’ll ever see in a film of this type; one in which the agents have to rescue one of their own is especially nail-biting. Though his strength lies there, he also balances the action with a surprisingly effective doomed love tale between Farrell and Li, an act that should have slowed the film down but somehow ripened it. Miami Vice had disaster written all over it, so you can now note that your reservations really don’t hold up anymore. 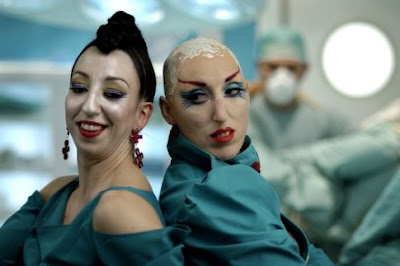 As the third musical that I‘ve reviewed in this post (though don‘t you think Miami Vice might have been a little better had the drug lords greeted Jamie Foxx and Colin Farrell in a lush Busby Berkeley number?), 20 Centimeters is one of the liveliest, most entertaining films I‘ve seen in a long while. Marietta (Mónice Cervera) is a narcoleptic transvestite who turns tricks to pay for her sex change. More Björk in Dancer in the Dark (if Lars von Trier had actually cared about her) than Hedwig, Marietta dreams up elaborate Rogers & Hammerstein musical numbers when she passes out, singing to the tunes of Queen and Madonna, to name a few. Her narcolepsy is both a curse and blessing, keeping her from holding respectable jobs, yet permitting her to act out her high ambitions in dream state. Her penis, too, comes as both a blessing and a curse, as she’s equipped with roughly eight inches (this is where the title comes from) of manhood, holding her back from becoming the true woman she is, but attracting the attention of dreamboat Raul (Pablo Puyol). Marietta lives her life despite such daunting contradictions, eventually hoping to move to Brazil with her neighbor Berta (Concha Galá) and moving away from her tiny apartment she shared with swindling dwarf Tomás (Miguel O’Dogherty). Salazar, writing and directing his second feature, manages to create a sincere depth to his characters through their flaws. From obese, unwed mothers to hyper-critical midgets to well-endowed tranny hookers, these characters find solace in one another and their grand ambitions. Salazar also peppers the film with delightful cameos from the likes of supermodel and Almodóvar favorite Rossy de Palma as a post-op hooker, Lola Dueñas (Volver) as a bitter fruit and vegetable saleswoman, and pop star Najwa Nimri (Sex and Lucía, Open Your Eyes) as a matter-of-fact prostitute with bunny ears and a bun in the oven. There’s always a looming harshness to what goes on in 20 Centimeters, but Salazar never presents this world as bleak; it’s a place where people’s dreams keep them alive just as much as their beating hearts.
Posted by reassurance at 3:12 AM

I'm a huge fan of Miami Vice, it's the best film I've seen so far this year. When I saw it, I got the same vibe I did from The New World, the way the central relationship was presented and the editing rhythms, which were more concerned with presenting visual moments than just telling the story. It's not as good as Heat, but I'd much rather see Mann tackle the themes in a different, more abstract way than just do a retread of what he did there, something that was certainly a potential issue with the film.

well in fact all the list is...how I can say this without be unpolite? well all this short cuts sucks, that is I said it! sorry for the expression but is true.