You taste of America 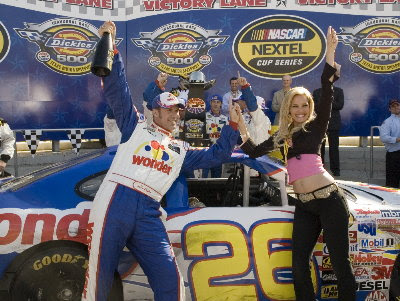 I've been accused of many things. One of these things would be a stubbornness when it comes to the crazy successful "buddy flicks" from the likes of Vince Vaughn, Ben Stiller, Will Ferrell, and Owen Wilson. Talladega Nights is the latest of the pack (or, hell, maybe another one has come out already and I forgot about it, there's usually at least four or five a year), the new breed of American comedy that gets together a bunch of friends in a series of variety-esque sketches thinly-wound to a forgettable story about underdog redemption or the importance of friends or, most nauseatingly, a love story. Thankfully, Talladega Nights more accurately fits the mold of a silly parody like Team America: World Police than Starsky & Hutch. Unfortunately, it fits into the mold of something as unsatisfying and obvious as Team America: World Police. Ferrell plays Ricky Bobby, a dim-witted freedom-fries breed of American who was born to race. The film very quickly speeds through his ascension to the top and focuses on his fall from grace to the hands of gay Eurotrash racer Jean Girard (Sacha Baron Cohen) and his eventual return to the NASCAR tracks. Written by Ferrell and director McKay, the film's almost refreshingly tongue-in-cheek, a successful parody of shitty Hollywood inspirational pictures that unfortunately just didn't make me laugh. 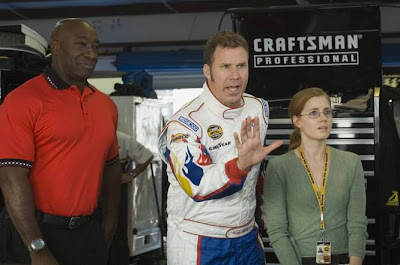 Ricky Bobby is the perfect hero of a film like Talladega Nights, a character void of any intellect or culture with a drive to be the best as his sole attribute. Like Team America, Talladega Nights is so faithful to the shitty films that it's mocking that you nearly forget that it's making fun of them; also like Team America, it's parody is easy, pointing its finger at the wretched formulas of Hollywood and the stupidity of America. Talladega Nights is the common man's tale of the American dream with a happy ending, something Arthur Miller would have probably despised. With every frame adorned with tacky product placement, its satire is facile and its jokes obvious; when Ricky Bobby decides to have a night of "fancy eatin'" with his mother (Jane Lynch), estranged father (Gary Cole), and two sons, Walker and Texas Ranger, an exterior shot of Applebee's causes more rolled-eyes than belly laughs. While sprinkled with a few fine smaller roles like the wonderful Amy Adams or misplaced cameos (Elvis Costello, Mos Def), Talladega Nights, with a DVD running time of over two hours, feels exhausting despite its light weight. You'd think a film that casually throws around references to The Golden Girls, Tawny Kitaen, The Pet Shop Boys, and even Gérard Depardieu might elicit a few clever laughs from me, but unfortunately, I sat on my sofa silent, always aware of the running time on my DVD player.
Posted by reassurance at 9:07 PM

I enjoyed the haunted house bit, but that was about it. The question is whether or not you consider Jack Black to be a member of this "frat pack" of which you speak.

I like Applebees. They have good Long Island Ice Teas. I am not ashamed. But as most things in my life it is the consumption of liquor that eventually wins me over. :)