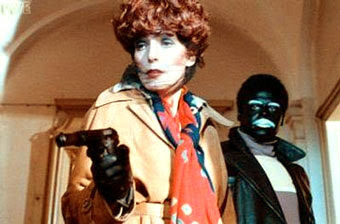 Like Bruce LaBruce’s uproarious The Raspberry Reich, Fassbinder’s The Third Generation brilliantly satirizes the dealings of social terrorism. In The Raspberry Reich, our heroine, Gudrun (Susanne Sachsse) proudly proclaims, “I don’t care about what’s going on in Guatemala, Chechnya, or Cambodia; all I care about is my orgasm!” The Third Generation doesn’t exploit the chic draw to terrorism, but, like Reich, the incompetence of the folks involved. Petra (Margit Carstensen) is far more concerned with making up stories about her husband beating her to cover up for her lesbian tendencies than any real political cause. In fact, I don’t think we ever understand why our band of terrorists are even attempting to kidnap a political leader in the first place. Social terrorism is, then, reduced to the boredom of the middle-class, the desire to take phony action to justify one’s self. Though he’s rounded up a wonderful cast (Carstensen, Hanna Schygulla, Harry Baer, Bulle Ogier, Udo Kier, Eddie Constantine), I find it difficult to call The Third Generation one of Fassbinder’s finer works. It’s effectively banal (like Beware of a Holy Whore), but it’s extremely quiet for both a Fassbinder film and a film of this subject.

Jackass Number Two has the astounding feat of being the only film I’ve seen all year to fully, successfully accomplish exactly what it wanted. Of course, it’s ambition doesn’t exactly mirror that of The Queen or Shortbus, but it’s all a matter of relativity. The film is a reunion of sorts for the punkish daredevils (Johnny Knoxville, Steve-O, Chris Pontius, Bam Margera, etc.), set to lower the bar of bad taste and shock value (jerking off a horse, creating a rectal beer-bong, among many other perversities). These jokes and stunts would simply qualify as fatalistic debauchery if there weren’t such a joyous camaraderie involved. Seeing a bunch of grown men shaving off their pubic hair and gluing them onto a friend’s face would likely offend most people, but there’s something genuine and pure about these boys’ childlike, homoerotic gross-out vignettes. The film includes a cameo from the maestro of bad taste, John Waters (whom Knoxville befriended working on the lousy A Dirty Shame), truly putting into perspective the actions in the film. Jackass is the wet dream of a man like Waters, a bunch of goofy, scantily-clad men running around offending people and partaking in dubious life-threatening stunts, but all in the name of entertainment and friendship. There are moments of brilliance, like when Pontius turns to the camera, straight-faced, after drinking horse semen and states, “I’m really ashamed of myself right now.” That the director chose to include some notable blunders and moments like the one above exposes the surprising humanity of the film. And what’s not to love about a film that ends in a glorious musical numbers with nods to both Busby Berkley and Buster Keaton? 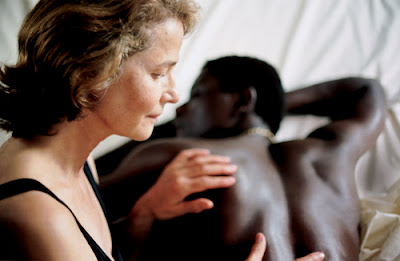 Laurent Canet’s fourth feature, Vers le sud, manages to be his most fascinating and complex picture, after Time Out (L‘Emploi de temps), Human Resources (Ressources humaines), and Les Sanguinaires. Starring the transcendent Charlotte Rampling as a stone-cold regular of a Haitian beach resort, the film carefully addresses tough issues: racism, classism, political upheaval, and the sexual desires related to them. The resort, headed by Albert (Lys Ambroise), serves as a hideaway for middle-aged, affluent white women to engage in their heated sexual desires for the black island boys. New to the resort is Brenda (Karen Young), a recently divorced southern woman hoping to rekindle the steaming love affair with the young Legba (Ménothy Cesar). Vers le sud is troubling in many senses, both good and bad. On a critical level, there are subplots that simply don’t work, such as a jealous rivalry between Rampling and Young, or, more specifically, don’t penetrate or provoke nearly as much as the rest of the film. Yet within the film, the counter between the intellectual, sophisticated ideas of race for these women and their searing sexual passion for these wild savage men pierces the flesh deeply. There’s no candy-coating of politically correct final revelation among any of these women, as they all seem fully conscious of the way they’re supposed to be feeling. There’s a frightening truth to all of what happens in the film’s final act as one of the locals very coldly reassures Rampling, “tourists never die here.” The women in the film never follow the logically path that an astute viewer would intellectually devise for them, as they all seem fixed in their inaccurate self-images. Vers le sud is both a flawed picture and a richly difficult one, far more potent and shrewd about its issues than most films dealing with similar subjects. 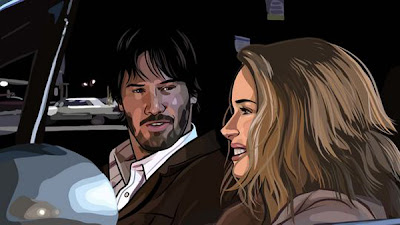 There’s always a tug-of-war of authority when it comes to films like A Scanner Darkly, where a filmmaker with a well-recognized style and thematic approach adapts a piece of writing by someone with just as much recognizable character and method. Imagine Fellini adapting a D.H. Lawrence novel if you will. Phillip K. Dick, of course, isn’t as important of a writer as Lawrence, but you can understand the comparison. His writing style is certainly recognizable, just like Linklater’s directing. Using the painted animation that he did with Waking Life, A Scanner Darkly follows undercover cop Bob (Keanu Reeves) and his growing addiction to a drug called Substance D (think Rush, if you will). The film is set in a not-so-distant future, where a vast majority of the United States has become addicted to this dangerous drug. Linklater never overuses his animation, only occasionally imagining drug sequences where Robert Downey Jr. turns into a bug. The tug-of-war of authority never manages to hinder A Scanner Darkly, though it feels as though Dick may have won the struggle. The film feels like Linklater wearing a mask similar to that which Keanu Reeves wears inside the police offices. A Scanner Darkly occasionally addresses questions of existence, but much softer than he does in any of his other, better films. The film is more concerned with government conspiracy and double-crossings than it is of typical Linklater themes. Granted, government conspiracy may be the topic of conversation in several of his characters; it is never the focus of any of his films. A Scanner Darkly may ring up lesser-than-usual Linklater (if you aren’t counting, say, The Bad News Bears or The Newton Boys), but it never manages to become throwaway or gimmicky, which is all to the credit of the director.
Posted by reassurance at 4:10 AM