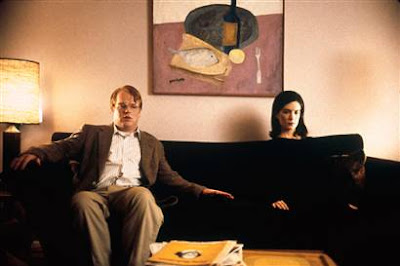 I just rewatched all of Todd Solondz's films, for better or worse, over the past week, and though I posted about his new film's cast earlier and that it was an intended sequel to Happiness, I was unaware that Forgiveness will also feature all of the same characters, played by new actors. This is what the IMDb lists:

It looks like Ben Gazzara's character Lenny won't be in it and that Charlotte Rampling and Gaby Hoffmann will be playing new characters (the kids are all different too, by the way) and Paris Hilton doesn't have a character name listed yet. I can only hope that Forgiveness is Happiness good and not Palindromes bad. Look for it to open at one of the big film festivals later this year, and I'll be writing more about revisiting Solondz's films later on.
Posted by reassurance at 5:27 PM

hey! I liked Palimdromes more than Happiness. Well, I remember laughing at it a lot, I can't remember if it was bad good or good.

I just re-watched it last night and hated nearly every minute of it. I'm going to write about all of his films in the next week or so, as soon as I get rid of my sinus problem.

I love so much this film!!! Todd is great!