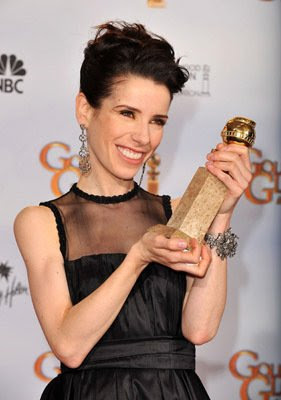 Was it just me or were the Golden Globes a lot more entertaining than in previous years (well, not including last year)? I don't have a lot to say about them otherwise, except than everyone involved with 30 Rock really kept things engaging, and that Sally Hawkins is adorable. However, did anyone else feel a weird sense of superiority when the winners of Slumdog Millionaire kept referring to the folks in Bombay who "will be going mental" when they see this? I've watched enough BBC to know what "going mental" means, but the way they spoke of everyone in Bombay appeared condescending, and not just because the people in question were children. Whatever.
Posted by reassurance at 3:22 PM

I guess I was too busy getting my much-needed education on Bombay that I missed their superiority.

And when did Demi Moore sleep with Jay leno?

I still think you could defend the way they spoke by understanding that it's mostly children they're referring to... but my radar kept going off whenever they spoke about the people in Bombay.

Harsh, Blake! I love it. Slumdog isn't as all-around offensive and inept as Crash... and people genuinely liked Slumdog before Oscar season. I can't think of a single critic raving about Crash before it won other than Ebert.

I'd be more apt to call Revolutionary Road the Crash of 08 if it were winning anything other than for Winslet, who really isn't deserving anyway.

I relate the two because I think that both of them are mediocre films that were taken in by a wide audience who can pat themselves on the back for liking it. Set the film in The United States and I think it will be equivalent to The Pursuit of Happiness and Little Miss Sunshine.

It was all too well laid out for my taste.

Yeah...but that was kinda, y'know, the whole film as a fantasy. Just sayin'. I don't think you can fault a film for its purile, sweet intentions. Plus, I'd agree its much more in line with Sunshine than Crash. Difference being that smart people actually like the former.
-M

...please where can I buy a unicorn?