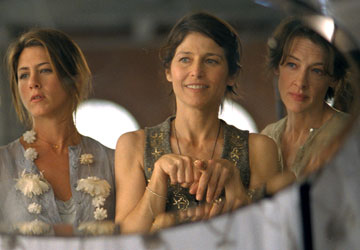 The pairing of some of your favorite ladies (Catherine Keener, Frances McDormand, Joan Cusack) with one of your not-so-favorites (Jennifer Aniston) might not have been as bad as this happens to be. Holofcener takes the Anne Heche/Catherine Keener characters of her quintessentially 90s dramedy, Walking and Talking, multiplies them and finds them where we'd logically assume they'd be in their early 40s, now in Los Angeles with terribly unsatisfying results. Her last feature, Lovely and Amazing, was amazingly dull, though Kenner will always be one of those actresses you'd watch reciting the phone book, and since then she's directed various episodes of Six Feet Under, Sex and the City, and The Gilmore Girls, which would explain why, despite some closing resolution, Friends with Money feels more like a television pilot that hasn't become truly realized than an actual film. 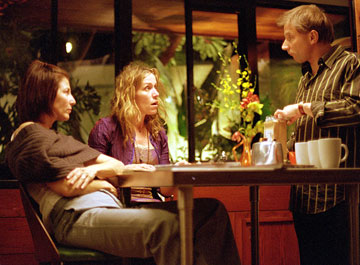 Jennifer Aniston plays the Jennifer Aniston role here, a beautiful, but down-to-earth, trying-to-make-a-modest-living gal (here, she's a house-cleaner... riiight). She routinely dines with her three girlfriends, all married and wildly more successful than she is. Kenner is a screenwriter in an unhealthy marriage. McDormand is a fashion designer on the verge of a nervous breakdown, with a sexually questionable husband. Cusack is the perfect one with a happy marriage and an endless bank account. Hannah and Her Sisters this is (unfortunately) not. Scenes slip past us, offering little depth or meaning outside the boundaries of the screen, and Holofcener's decision to not use a tripod during most scenes feels more amateurish than effective. I stuck with Friends with Money despite all this, until Holofcener decided to teach Jennifer Aniston a lesson. It's a lesson we all have been told forever, and though this may be because of Aniston in the equation, it still doesn't work. Though it may be better than those other Friends we know Aniston from (only with money), but you're better off finding some better ones.
Posted by reassurance at 11:20 PM

Dude, your blog is awesome. I really love it!

I actually liked "Friends With Money" and shockingly it's because I find the lovely and amazing Joan Cusack under used and under valued. Keep writing.....your too good.