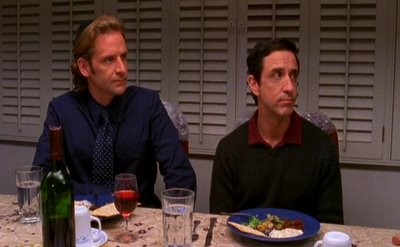 Normally, something like Adam & Steve would not be a film I'd even think about watching, but I'd threatened that I might, if only for the fact that I'd probably watch Parker Posey reading from the phone book. But, after watching The Descent, I needed a diversion. And, I guess Adam & Steve was it. I sound like I'm groaning about the whole experience, but it really isn't that bad. Adam (writer/director Craig Chester) and Steve (Malcolm Gets) have a disasterous one-night-stand in the late-80s, only to begin dating in 2005 and not recognize one another. This makes things a bit more interesting than your average romantic comedy. 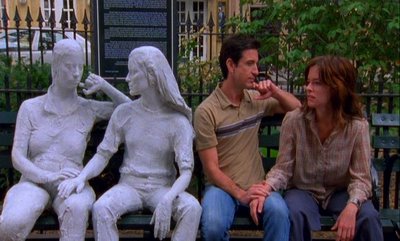 At one point during the film, Steve exclaims, "I don't want an open relationship like the other gay couples, nor do I want a gay version of my straight friends," and this comes after both men admit their love for Meg Ryan/Julia Roberts flicks. Essentially, this is what the film is trying to do at first. It's a romantic, slapstick comedy that works (at first). Adam has a fear of public displays of affection, because every time he does, "some asshole from Jersey throws a beer bottle at my head." And this joke runs through most of the film. Eventually, after an unnecessary dance-off, the film brings us back to the ho-hum Roberts/Ryan films we thought Adam & Steve wouldn't become. But, really, after The Descent, I didn't really care. How can you really dislike a film where Parker Posey wears a fat suit and dresses like a goth girl, who eats chicken wings out of her purse and mutters lines like, "I'm sweatin' like Whitney Huston going through customs?"
Posted by reassurance at 10:19 AM