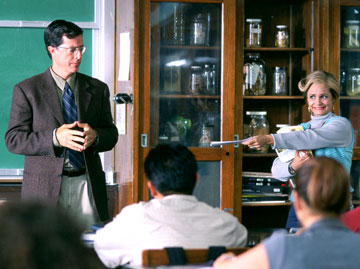 Strangers with Candy is like an old friend you haven't seen in a while after they've gotten an expensive tummy-tuck, face lift, and boob job, not to mention some nice designer accessories. There's really little deviation from the series, except that they had a budget. So, we have a full score, larger classrooms, and a lot more star-studded cameos (from Sarah Jessica Parker and Justin Theroux to Philip Seymour Hoffman and a hammy Matthew Broderick). Everyone's favorite high school sweetheart, Jerri Blank (Amy Sedaris), has just gotten out of jail (the film is a prequel to the show, kinda like Fire Walk With Me... or not) and decides to start her life back where she left off, thirty some-odd years prior in hopes to wake her father (Dan Hedaya) from his coma. Though the film wears thin once you realize this isn't a half-hour episode, it still provides some of the heaviest laughs I've had in a theatre in a long while. Somehow the movie, despite being lifted from the limitations of television, seems a little less offensive than the show did. Although Jerri still makes a monkey reference to her Pacific Island friend whenever she can, she seems a little less racist than she used to be (or, accurately, becomes). Either way, if you like the show, you'll laugh.

Jerri (to Mr. Noblet): Faggot.
Mr. Noblet (Stephen Colbert): What did you say, Jerri?
Jerri: What do you think I said?
Mr. Noblet: I'd rather not say.
Jerri: Then I guess we'll never know.
Posted by reassurance at 3:16 PM