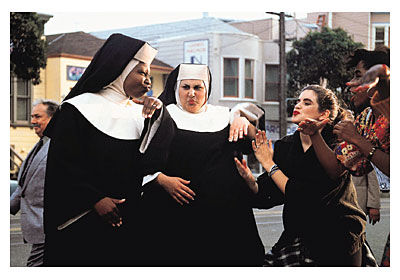 Always guaranteed to emit ironic laughter from patrons, my co-workers and I occasionally whip out the Sister Act movies for work time diversion. The original Sister Act, as I'm sure you know, brings Las Vegas lounge-singer Whoopi Goldberg to a San Francisco convent, where she hides out from her mobster boyfriend, Harvey Keitel, after witnessing a murder. Mayhem insues, naturally, as the sassy Doloris Von Cartier must become the respectful Sister Mary Clarence and, surprisingly, turn their choir into a singin' sensation! Whoppi brings Diana Ross to the church, against the best wishes of the Mother Superior, Maggie Smith. Predictably, Maggie Smith, totally slumming it, must accept the rousing choir as it has not only attracted the attention of godless hoodlums and latent Catholics, but the pope himself!! How a premise like this worked for audiences, I'll never know, especially considering the silly crime subplot that takes the nuns to Vegas for a showdown. Sure, it's light and familiar and never offensive, but it's not the film itself that irks me as much as the people who would actually rent it. 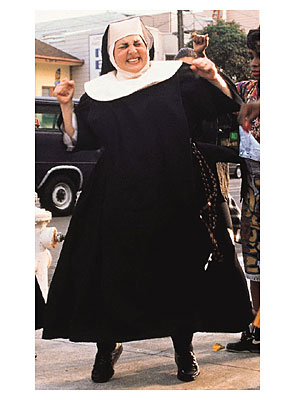 Sister Act 2 finds Doloris, now a sensation, returning to the convent to teach a music class, filled with unruly inner-city kids that form rap circles in the schoolyard and back-talk to their helpless teachers. The other nuns can't match the wits of these youngsters, so they enlist that sass-talkin', no-shit-takin' Sister Mary Clarence for the job. Sound a lot like Stand and Deliver and Lean on Me and My Dangerous Mind? Tension heats up when the bishop threatens to close the school down -- what to do!!!??? Form another choir, right? I mean, it worked the first time around... helloooo, the pope came! So, Whoopi gets these whipper-snappers into shape. It's the same premise as the first, but with an attempt at a younger, hipper audience. Unfortunately, the kids, which includes Lauryn Hill, Jennifer Love Hewitt, and Alana Ubach (Clockwatchers, Freeway), are strangely unrealistic figures of youthful disdain. This is a PG-rated movie, so these kids, from the inner-city of San Fran, don't pull out guns or call each other "niggas." Instead, they throw "yo momma's so fat" jokes at one another, and we're supposed to buy this 'cos they're all Catholics? This is not to say that the over-thugged out teenagers in 187 or Dangerous Minds are more accurate, but they seem easier to accept as actual teenagers than the candy-coated thugs of Sister Act 2 that sing songs like "you down with G-O-D? Yeah, you know me!". 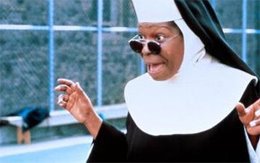 What really bothers me has nothing to do with these uninspired screenplays or silliness. I don't understand how these two films, among so many others, preach defiance and the undermining of authority and are viewed by crusty old women and choir-loving teens. This is a theme present in so many films of this calibre, especially films about young kids fighting the odds, yet what purpose does it serve? You can admire it's intention, but the Sister Act movies only give us is the problem and the painfully obvious triumph of the odss. The actual struggle passes by our eyes in shitty musical montages, allowing us to forget that our goals actually require work. In another sense, defiance becomes an act of poppy manipulation. The goals appear large, but in any large scale, they're trivial and somehow end up bringing us back to the conservative, Christian authority. The defiant ones temporarily succeed, but we're left questioning what's next. A friend of mine told me he read a review for V for Vendetta that compared it to a hypothetical situation of Britney Spears singing about politics. The Sister Act movies show us that defiance is not only something easily accomplished in our cinema time-frame, but something lacking any meaning, except personal gain. Perhaps that is what all, greater forms of defiance end up reflecting, but I'd rather not see it in the form of nuns singing "Nothing you can do can take me away from my God."
Posted by reassurance at 10:36 PM

Maybe you are just bitter because you went to a Catholic school and you didn't have any nuns as cool as Sister Mary Clarence. ;)

I'll admit that when I was ten I thought Sister Act was a funny movie. But check the age.

And some trivia.... originally Sister Act was a vehicle for Bette Midler.

I must say that a review would read much differently had Bette actually taken the roll. Oh, how she hurt her career. ;)

Are you sure Bette wasn't up for the Kathy Najimy role?