It’d be too easy (and too satisfying) to claim that Hollywood has fallen out of love with the inspirational teacher subgenre that brought us such ham-fests as Dangerous Minds, Dead Poets Society, Mr. Holland’s Opus and (sorry Sister Mary Clarence) Sister Act 2, for that would be forgetting the unsavory offerings they gave us over the past ten years. Freedom Writers, The Great Debators, Mona Lisa Smile, anyone? In fact, intellectually responding to the pervasive romantic fallacies about a single teacher inspiring their (usually racially diverse) students emerged as a successful trend in both film and television over the past decade. Season 4 of The Wire is usually the first example to come to mind (and for good reason, more on that later), but other examples like Half Nelson, Forest for the Trees [Der Wald vor lauter Bäumen], Summer Heights High, To Be and To Have [Être et avoir] and even Mean Girls, The White Ribbon [Das weiße Band] and Happy-Go-Lucky, where the subject is more of a minor note, all address the struggles of the educator and the (often) depreciating toll of their noble intentions.

The gods of cinema must have deemed it uninteresting to make films about teachers whose contributions in the classroom didn’t manage to fill the students (and viewer) with a sense of hope and inspiration (exception given to extreme counterexamples of high schoolsploitation films like 187 and The Substitute). Because if the world of academia were filled with Mr. Hollands, Sister Mary Clarences and Michelle Pfeiffers, we wouldn’t be faced with the complex, frustrating, almost soul-crushing reality of Laurent Cantet’s The Class. While the French title Entre les murs, also the title of star François Bégaudeau’s book on which the film was based, literally translates as Between the Walls, its English title brings forth an appropriate dual interpretation. Naturally, there’s class in the sense of the physical room or the collective of students, but class on a social level is closer to the prevailing themes of all of Cantet’s films.

Despite changing juries each year, the Cannes Film Festival gave their top honor to three strikingly similar films in the ‘00s: the Dardenne brothers’ L’enfant in 2005, Cristian Mungiu’s 4 Months, 3 Weeks and 2 Days [4 luni, 3 săptămâni şi 2 zile] in 2007 and The Class in 2008. Thematically, the films approach class head-on and do so without a hint of sentimentality. Stylistically, all three employ a naked realism, leaving tripods and musical scores behind, and hone an impenetrable atmosphere, layered with surprise, tension and that unshakeable feeling that everything isn’t going to be okay. While that dread fueled L’enfant and 4 Months, 3 Weeks and 2 Days in the form of suspense, it stirs something a bit different in The Class. Bégaudeau embodies the same enthusiasm, charisma and passion for teaching as his Hollywood counterparts, but it becomes clear early on that he’s flying without safety net and that perhaps those traits will never trump the apathy of those you’re trying to encourage.

It would be wrong to describe The Class as bleak however. Cantet, Bégaudeau and co-writer Robin Campillo avoid the incorrigible as much as they do the simplistic. Their collective efforts in trusting the audience, circumventing the easy answers and brazenly confronting a slew of challenging issues make The Class the triumph Cantet’s films have been consistently building toward. 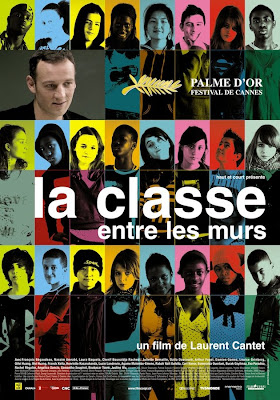 When I first saw "The Class", I must say that I thought it was rather dull, but over the months it has rather been turning over in my mind. Firstly its inteesting the differences in the French method of teaching to the more "political correctness" of the UK/USA style. I'm sure any teacher who spoke to their students as he does, or calling a girl a "skank" in the english speaking world would be kicked out of the teaching profession.Secondly we see children in the "third world" make great efforts to get an education, so why when they get to Europe or the States are they so disengaged?

Response to Teabag - these children know that there prospects are next to nill once they leave school. I'm not saying that the film was a direct response, but this was made 18 months after the riots. This "disengagement" is there for so many valid reasons. Equal opportunity is a novelty notion.

On the bad choice of words....everything that leads up to the moment where he uses the word - is to prove that a. he to can make a bad judgement call.... and b. that he belongs to a system that is struggling to keep its head above water. There simply isn't the kind of support that is needed. I think the real cause for concern is in the film's final scene - the child who spent 10 months in a classroom and was neglected. The microcosms of a class within a school is a reflection of the society they live in..and if the system fails one child (see Truffaut's Small Change) then it can easily do the same damage for the dozens in this film.

The Class is a gem.