Of all of the decade’s notable directorial debuts, no other director found their footing as succinctly and skillfully as Lucrecia Martel, who managed to craft one of the striking masterpieces latter part of the ‘00s with her third film, The Headless Woman [La mujer sin cabeza]. Building upon the worlds of both La ciénaga and La niña santa, Martel molds The Headless Woman around a central mystery. Did bottle-blonde, affluent dentist Véro (María Onetto, brilliant in an extremely challenging role) run over and kill someone on an empty road? In a moment of panic, she drives away from the accident where something, whether a dog or a person, was fatally hit. It depends on who you ask what the answer to the cryptic puzzle is, but most will agree, nothing about The Headless Woman can be deduced in simple terms.

Martel’s films thrive on the peripheral; she spends no time introducing characters, all of whom seem to know or have blood relations to the those upon which she focuses and seem to flutter in and out during the course of her films. It’s a refreshing, if frequently disorienting, technique, and one she puts to masterful use in The Headless Woman. Following the accident, Véro suffers a strange bout of amnesia as she disassociates herself from the crash. After a visit to the hospital, she hides away in a hotel, not unlike La niña santa, which is owned by either one of her family members or close friends (forgive me for not remembering a lot of the factual details, even though I did just watch the film again this past Sunday).

It becomes apparent that what Véro is suffering isn’t just fleeting panic but something more psychologically severe during the scene where she walks into her place of work and sits herself down in the waiting room, clearly unaware of her own profession or why she’s even there. Martel gives us very few details about Véro before the crash, which happens within the first fifteen minutes of the film, placing the audience on the same level as the protagonist, blind to almost everything that’s come before the accident and just as startled at everything that follows. Véro’s actions following the crash seem mechanical; she knows which hotel to go to and which house is hers, but she lacks recognition of the people around her and the circumstances of her own life. At the hotel, she runs into Juan Manuel (Daniel Genoud), a face she recognizes, and has sex with him. It’s later revealed that Juan Manuel is the husband of Josefina (Claudia Cantero), who’s either Véro’s sister or her cousin (no review or person I talked to seemed to be really sure about which). Though the question as to whether the two were partaking in an ongoing affair or if it happened just the one night is never directly answered, Martel tells us all we need to know when Véro, then convinced she did in fact kill someone that day, and Juan Manuel face one another again at her house.

The emphasis on the peripheral in The Headless Woman is where Martel’s strength as a filmmaker reveals itself even more dynamically than in her previous efforts (after La niña santa, The Headless Woman is the second of her films that Pedro and Augustín Almodóvar co-produced). When used in the realm of characterization, the film shows a peculiar, surprising sense of humor. From Véro’s crazy tía Lala (María Vaner) who sees ghosts and Josefina’s hepatitis-ridden daughter Candita (the wonderful Inés Efron of XXY) who discloses her crush on Véro by groping her and stating at one point, “love letters are to be answered or returned,” the actual world of The Headless Woman is a bizarre one, even outside of Véro’s mental distress. The combined efforts of cinematographer Bárbara Álvarez (who also shot Rodrigo Moreno’s wonderful El custodio) and the entire sound department rival Alfonso Cuarón’s Children of Men in technical flawlessness and innovation.

(While I hate to keep harping on this particular subject, especially as I’ve argued against it many times before, it’s worth noting that I don’t think I could truly appreciate the film’s technical prowess until seeing it projected on the big screen, where it swallowed me whole. It probably also helped that I was seeing it for the second time, after watching it at home months prior. But without being encompassed by the film in a theatre, committing one’s self to it without the leisure of home viewing, The Headless Woman loses some of its power. Note also how several critics have admitted to not really "getting" what Martel was up to and changing their tune after seeing it a second time.)

Truly though, it’s the way Martel addresses the film’s central mystery that makes The Headless Woman such an uncompromising and incandescent film. The details surrounding the disappearance of a child (more than likely one of the boys we see running around the canal in the opening scene), a block in the canal after the big rainstorm that arrives just after the accident and Candita’s offhand mention of a murder are all revealed almost extrinsically. For those familiar with Martel’s work though, nothing can truly be described as extrinsic in her films. In a certain light, the elements described above nearly create a secondary narrative, but as Martel situates the film entirely in Véro’s perspective, they cannot be seen as mere red herrings. I think if you pay attention to not only the details but the way in which the men in Véro’s life—her husband Marcos (César Bordón), her brother Marcelo (Guillermo Arengo) and Juan Manuel—interact with her, there is an answer to what happened on the road that day. Add that to Josefina’s proclamation that all the women of their family eventually succumb to madness, recognize the division of class in the film and The Headless Woman becomes less opaque than it originally appears.

While certainly a difficult film to market, the fact that it took The Headless Woman over a year to make it to the United States after premiering at Cannes in 2008 can best be attributed to reported cat-calls and boos it received at the premiere. The film doesn’t have the beneficial shock factor of something like Antichrist, which was picked up for US distribution immediately, and it wasn’t until I saw the film top IndieWire’s poll of the best undistributed films of 2008 did I realize the jeers it received at Cannes were as unjustified as they tend to be at that particular festival. Think of them then as a nod to the reception Michelangelo Antonioni’s now classic L’avventura, which also surrounds a mystery without an expected resolution, received in 1960. For the perceptive viewer (or one that’s given the film more than one sitting), The Headless Woman is utterly brilliant filmmaking, the sort that will hopefully fuck with and perplex audiences for decades to come. 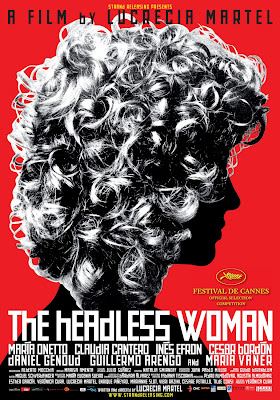 Nice piece on a tough film to write about!

Beautiful piece; one I need to see again.

@James @Chazz, thanks for saying so. I appreciate it. And, no, The Headless Woman is not an easy film to write about, but I can think of few (new) films I've seen in the past two years that are more rewarding with multiple viewings than this one (especially as I got to see it play on the big screen at the Saint Louis International Film Festival, where its aural brilliance really came to life).

@girish, Please let me know what you think when you get around to seeing it. It hits DVD from Strand on 15 December. Turn the volume up loud.

Great write-up, especially your point about Martel anchoring her film in the periphery.

Your point about the big screen is also well taken. I just finished watching it on my laptop, where it's hard to be enveloped by a movie, even one as tactile as this.

The other problem is that, thanks to instant viewing, the central mystery wasn't so mysterious to me. Right after the crash I rewound, took a screenshot, and magnified it.

P.S. Here's a shot in the dark. We hear tell that the dead kid was drowned. At the beginning of the film, one of the boys gets stuck in the canal, tries to leap out and falls back down. Perhaps his friends left him there and he simply wasn't able to get out?

I read in (maybe) A.O. Scott's review that the people who watched it at home said there wasn't much question as to what Véro hit, but in the theatre, despite being shown on a huge screen, I couldn't make out anything.

Also... I don't even recall the boy getting stuck in the canal. Shit, guess I'm queuing it up on Netflix again.

if my memory don't fail me, I saw this movie long time ago, I can't remeber very well the plot, but I think this movie is about a women who hit a boy with her car, right?