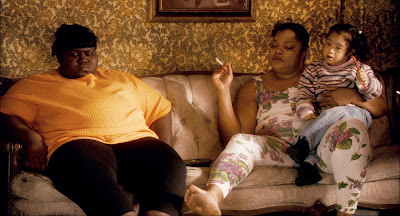 There's so little time left in the year for me to spend a whole lot of time writing about films that I don't like, but I need to flush my feelings for Lee Daniels' Precious out in some form. When my friend Tom sent me a Netflix note saying, "God help me, I partially agree with Armond White," I couldn't help but share his sentiment. Despite the editorial errors (really, how does giving the wrong title for a director's previous film, Shadowboxer not Shadowboxing, get past the NY Press' editor?) and including Marci X, Little Man, Mr. 3000 and Norbit (!!) in all seriousness as "excellent recent films with black themes," White sort of nails the self-loathing that runs through all of Precious, from its ludicrous fantasy sequences--the worst of which placing Precious (Gabourney Sidibe) and her mother (Mo'Nique) in a scene from Vittorio De Sica's Two Women as they watch it on television, despite the fact that Precious is barely literate--to its onslaught of racial stereotypes. 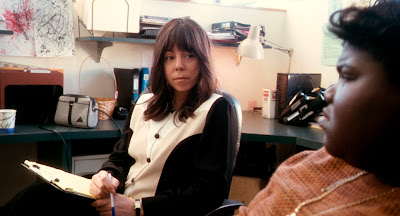 I am glad, however, that Lee Daniels' incompetence is finally getting some press after the film screened at the New York Film Festival. No one seemed to have a bad word to say about it at Sundance, Cannes or Toronto. Poverty porn, emotional porn, a new kind of blaxploitation, an impeccably acted piece of trash, a con job -- all of these descriptions are appropriate. One of the highlights of White's review points out one of Daniels' unsubtle, messy visual gimmicks: "The scene where Precious carries her baby past a “Spay and Neuter Your Pets” sign is sick." But I can't help but give it up, as most of the film's detractors other than White seem to be doing, to the actors, from newcomer Sidibe, a monstrous, Joan Crawford-on-welfare Mo'Nique, a make-up-less, ratty-wig-donning, Jersey-accented Mariah Carey and Paula Patton as the light-skinned lesbian teacher/saint who looks after Precious. Whether the actresses' collectively marvelous performances add to Daniels' lunacy or rise above it isn't certain... all I know is that, thanks to its audacity, if Precious does manage to take home the Best Picture Oscar next February, I won't moaning as much as I did when that other overblown race-issue melodrama did a few years back.
Posted by reassurance at 8:00 PM

I think the reasons you found it deplorable were the reasons I found it fascinating and refreshing. This is the most racist thing I've seen since Bamboozled, and instead of the felating, exploitive collection of black films to come out today to celebrate, this absolutely doesn't flinch. The fact that Oprah and Perry have jumped behind this self-hating opus is not only fitting, but earily telling and reprehensible about what they believe. Either that, or they missed the blatent subtext, if you wanna call it that.