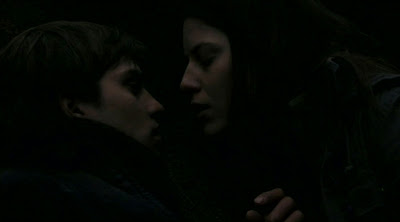 So I kind of ignored the AFI Film Festival line-up, expecting that it'd follow along the lines of all the year's previous fests, but to my surprise, I found that Philippe Grandrieux's Un lac [A Lake] will be making its North American premiere, after its official unveiling at last year's Venice Film Festival, on 2 November. Grandrieux is such a difficult filmmaker that it's easy to understand why only one of his films have made it stateside, even if it's frustrating to think so. He's brave and cinematic, which makes the fact that I've seen his two previous films, Sombre and La vie nouvelle, on home video so irritating. Though I haven't seen Un lac, I would recommend those in LA to check it out based solely on his previous films, and if you do, let me know how it stands up.
Posted by reassurance at 5:53 AM

I enjoyed SOMBRE very much, but I was only a fan of the first half hour of LA VIE NOUVELLE, which I did see theatrically.

I'm contemplating seeing UN LAC at AFI Fest, but my experience with LVN soured me badly on him.

Unfortunately, I saw LA VIE NOUVELLE on the same day as Haneke's TIME OF THE WOLF, a film I really despised. I usually like Haneke, but this one bored me to tears.

I always enjoy your posts.

You're absolutely right that La vie nouvelle doesn't sustain the momentum of its first half, but I seem to have been much more forgiving than you were. I've read wildly mixed things about Un lac (all in French), but I've never trusted the French to accurately judge their national artists.

If you've still got a little spark from Grandrieux, I'd check out Un lac. Who knows if it'll ever get an official release in the States.