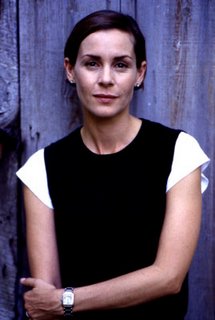 Furthering on my previous post about Amy Adams and Psycho Beach Party, I actually got around to watching Junebug shortly after posting. Though I'm going to try it myself, I think Joshua Tanzer's opening comments in his review on offoffoff.com truly sum up the joy of Junebug. While I certainly don't get paid for doing so, I do tend to watch a lot of films. And though I've probably passed up the handful of Meg Ryan and/or Vin Diesel flicks he's paid to write about, I've seen enough of the same tripe to know appreciate when someone does it well. So what is it that we look for when we constantly surround ourselves with cinema? For me, I'm looking for an unquestionable masterpiece (Fanny & Alexander) or a truly shameless howler (Showgirls). And, yes, unfortunately, most films fall somewhere in between... and it sure is a vast terrain. Junebug dances on top of very familiar territory (a city man and his new, hauty wife return to his humble hometown), but like Thumbsucker (another of the notable and sure-to-be-forgotten "indies" of 2005), it does so much well within its own familiarity that it's rather hard not to admire. 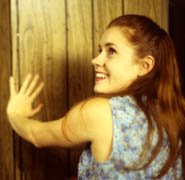 I can hardly say I've grown a taste for the usual Sundance fare, but it doesn't hold me back from admiring a film like Junebug. In my Thumbsucker review, I commented about the horrors of American independent cinema, as new directors find their own deity with a recognizable signature and revamp.. and revamp.. and revamp his or her style well after rigor mortis. Junebug stands as another nice example of a stepping away from the Wes Anderson impersonations that so dominated the film festival/arthouse circuit in the past years. Junebug is earnest.. and it's fucking sweet. But what works best in the film is that the director never puts himself or his protagonist Madeleine (Embeth Davidtz), a primmed, cultured, worldly woman, above its subjects. In the end, we're upset to find that Junebug is, in fact, a "message movie," a particular style of filmmaking (er, storytelling) Michelangelo Antonioni bashes in one of the essays of the Criterion disc for L'Eclisse and one I especially abhor. While there's a message to be discerned, there isn't a character or group of people who are in fact "had." Never is Junebug a film about a cultured woman's disgust over a group of lesser educated Southern folk, nor is it a film where the cultured woman learns that her intellectual ways prohibit her from true human contact. Instead, Junebug is a film about quiet discovery instead of rash patronization. Two particular elements stand out, among others. In one scene, Madeleine's devilishly handsome husband George (Alessandro Nivola) gets in front of a congregation to sing a religious hymn. Instead of an awkward fuck-up on George's part or a religion-is-the-seed-of-all-evil message, it exists as a moment of discovery for Madeleine about George. Director Morrison uses a subtle prop, a body pillow, to visually express an underlying feeling of lonliness in the charcter of Ashley (wonderfully played by Amy Adams, who's truly the standout in a uniformly nice cast).

If Adams wins the Academy Award, Junebug will join the ranks of quickly forgotten films like Iris, Girl, Interrupted, Pollock, or Affliction whose only claim to fame is a supporting actor Oscar. Junebug is better than the films above, but it will stay in my memory as one of those exceptions to rule that all American "indies" blow.
Posted by reassurance at 1:34 AM

I doubt you're in the habit of checking comments on 2-year-old blog posts, but for what it's worth Affliction is actually a really good movie. I'd say great, but I haven't seen it since it came out (but I haven't forgotten it, either).

I found this site using [url=http://google.com]google.com[/url] And i want to thank you for your work. You have done really very good site. Great work, great site! Thank you!