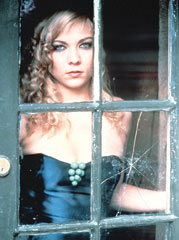 The title of this post refers to what the studio, Rank, had to say about Nicolas Roeg's long-forgotten Bad Timing (also known as Bad Timing: A Sensual Obsession), which has only recently (since it's gorgeous Criterion release) received the attention it deserves. Probably Roeg's last great film, Bad Timing investigates the apparent suicide attempt of a young girl (Theresa Russell) through the memories of her older lover (or is it stalker?), Art Garfunkel (I'll try to forgive Roeg for showing me more than I ever wanted to see of Art). Bear witness to some of the most marvelous editing techniques you may ever see (well, aside from Roeg's previous films). He intended to make a film about how a man cannot intellectualize himself out of love and/or obsession, but also acutely tackles ideas of truth, reality, and fatal attraction. While I don't think it's nearly as glorious as Walkabout, Don't Look Now, or Performance -- it haunted me for days.
Posted by reassurance at 4:40 AM

You really though Walkabout was that glorious? .... save for the nudity ....

This movie aggravated the hell out of me. I have never turned off or walked out of a film, but I really wanted to with this one. The fragmentary editing is definitely interesting, but it can't redeem the gratingly amateurish performances or the way the whole film seems willfully pedestrian right up until the "shocking" climax. The time-jumping of the editing seems like just a device to cover up the essential banality of the dialogue and plotting, much like people accused Memento of doing. At least in that film, though, there was a real narrative purpose to the structure; here it's just a gimmick.