I've Asked You Forty Different Ways, It's Time You Come Up with a Fresh Answer 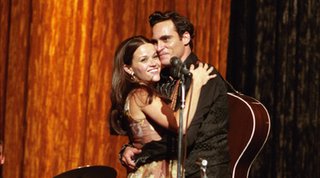 When Johnny Cash (Joaquin Phoenix) proposes marriage to the love of his life June Carter (Reese Witherspoon), he asks her to come up with a fresh answer. Strange, we as an audience were asking the same thing out of this film. A fresh answer. The world of film biopics has always bothered me. How many times do we have to see the tortured artist's humble beginnings, rise and fall and rise and fall and phoenix-like return onscreen before we just stop caring? Apparently, we haven't reached that point. But, I don't think we (as in the film public) will ever. There will always be a built-in audience for each separate biopic the studios throw at us, and even if we are seeing the exact same thing, the fans will flock. Especially with Hollywood's timing of releasing these films right after the fans have mourned the artist(s) in question's death(s). Then again, I suppose that makes sense. Who wants to see a biopic of a thirty-year-old? To find out the answer, see how few people buy Alanis Morrissette's upcoming autobiography. Although, my predicted low sales may have more to do with the fact that no one ever really cared about her in the first place, not because of her age. 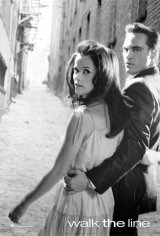 Anyway, I digress... Johnny Cash. What makes Walk the Line different from What's Love Got to Do with It?, Ray, or Pollock? Really very little. We begin with an audience of prisoners anxiously awaiting Johnny Cash's big comeback at the Folsom County Prison. Johnny is backstage staring at a table-saw. Cue childhood flashback! Humble beginnings on a farm with a loving mother and a repressive father. Father disapproves of Johnny's obsession with music. Angel-child brother dies in accident. Father takes blame out on Johnny. Welcome onscreen, Joaquin Phoenix! These childhood moments are significant, you see. How are we to understand the tortured artist without knowing about his childhood neglect and parental disapproval? Apparently these moments are where we can say, "Well, his drug problems are okay; he had a horrible childhood! He feels responsible for his brother's death!" Strangely the same exact thing happens in Ray. The key to being a successful tortured artist is dealing with the death of a sibling. Children, take note. You wanna be the next Ray Charles or Johnny Cash? Make sure to get your gifted sibling in a deadly situation. Allow your parents to take their anger out on you, battle with severe drug addiction for a few years, and voila! A tortured genius, Hollywood-style. 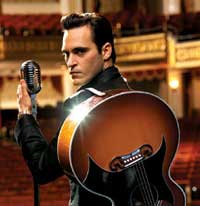 The biggest problem in dealing with Hollywood biopics is the great question, "by applying dramatic conventions to a real person's life, are you in some way cheapening it?" I found myself caring less about Johnny as a man seeing him portrayed as the Hollywood 'tortured artist.' I thought to break out of this rigid structure one could make a documentary... but conventions lie there as well. And when dealing with a popular figure, it's hard to get away from those traps. When she approached a subject like Valerie Solanas, director Mary Harron planned on making a documentary, but when so few footage of Valerie was available, she decided to make a narrative, called I Shot Andy Warhol. And while I don't remember being wowed at the time, I currently long for the freshness of that film. No childhood flashbacks, no obvious dramatic clichés, just an entrance into the mind of an historical figure. 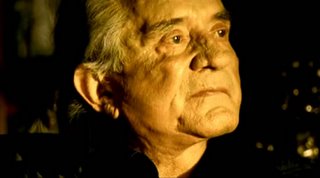 For as much as I'm spitting on Walk the Line, it's probably better than Ray or What's Love Got to Do with It? Phoenix does a decent job in making Cash more of a person than an impersonation, which was the huge flaw of Jamie Foxx's portrayal of Ray Charles. And Reese Witherspoon is exceptionally good as Carter (probably her best performance since Freeway, though a strikingly different one). There are moments where I allowed yourself to be emotionally manipulated, but those moments may have been premeditated in my mind. Everyone knows how Johnny Cash and June Carter's story ends. June dies, Trent Reznor gives Johnny the rights to his song "Hurt" which beautifully fits Cash even more than Reznor, and Johnny dies just months after the love of his life passes. I've always found it strangely beautiful when lovers die within months of one another, and the popularity of Cash's Reznor cover really drove it home. So I allowed myself to fall into the screen when Cash unsuccessfully woos Carter (only to get her in the end). And maybe that's what Hollywood wants from an audience? They assume you know the story, so they hope your own emotions can fill in the wholes. I guess I just ain't buyin' what they're sellin'.
Posted by reassurance at 11:53 AM