I'm Going to Take That Hope, and Shove It Up Your Ass 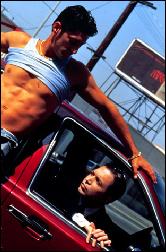 Huslter White centers around two characters, one a hustler named Monti Ward (played by one of Madonna's former lovers, Tony Ward), the other, played by LaBruce, an obnoxiously snotty and gay German "researcher" Jürgen Anger (with certainly no relation to Kenneth, as he rudely responds). Jürgen is visiting LA for purely "antropological reasons," driving up and down the hustler strip of Sunset Boulevard (the film actually makes rather ridiculous homage to the film of the same name by opening with a monologue by Monti over his face-down dead body in a jacuzzi). Monti is trying to make a living to support himself and his infant son. Little attention is payed to his status as a father, aside from a scene with Monti and his kid in a bathtub. However, the scene exists as more than simply another reason to get Tony Ward's clothes off, and adds a level of humanity to an otherwise outrageous film. When dealing with the absurd, a level of humanity isn't necessary; in fact, I think at times it seems false or cheap. For an example of that, look at any of the popular, "goof-ball" comedies of the past few years (The Wedding Crashers, The 40 Year Old Virgin, Old School, et al) and notice how the zany antics are interrupted by an even cruder "humanity," as one of the wacky characters falls in love. This however is not how LaBruce works (my apologies go to the co-director Rick Castro, who I have not and probably will not mention again in this critique).

LaBruce instead operates with a healthy symbiosis of criticism and admiration, absurd and poignant. There aren't many humanistic moments in The Raspberry Reich, LaBruce's masterpiece of leftist terrorism and (you guessed it) porn. But he reaches a perfect balance in his exposure of the characters' ridiculousness and an appreciation of their idealism. In Hustler White, after the shock wears off (though I'm sure you won't forget the amputee fuck scene), there's a level of sadness, disillusionment, and agony... dealing with the quintessential elements of New Queer Cinema. I've made this argument for Gregg Araki as well. His over-the-top antics are beautifully matched with extreme lonliness and despair. One of the whores in Hustler White laments throughout the film over a crush on a man who won't kiss him. Once Jürgen's cold hauteur wears off, we can see his true feelings for Monti. And it just fits in comparison to Araki that Monti's character "dies" right as Jürgen was about to turn that "ho into a housewife." To dismiss Araki or LaBruce as provocateurs would be gravely wrong.
Posted by reassurance at 2:10 PM