Who You Gotta Fuck to Get a Hotdog Around Here? 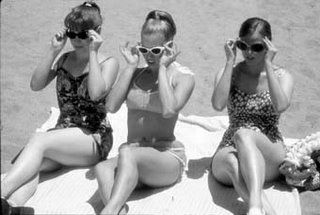 No one knew who Amy Adams (above, center) was when she got an Oscar nomination for Junebug. Well, no one except for fans of the beach movie/slasher flick, Psycho Beach Party (okay, that's probably not true, but that's how I remembered her). Self-conscious camp rarely works, especially when it's a pretty direct parody. The Scream films didn't work, because their self-awareness elevated them above their subject matter so much that it felt more clumsy than ironic when the films followed the same fate as those they put themselves so above. Psycho Beach Party, instead, is rather a joyous homage to teens-in-peril drive-in flicks and Frankie and Annette beach romps. Its tongue-in-cheek-ness pushes to the point of choking, but it isn't without its pleasures: the opening credits, the terrible blue-screen surf sequences, Adams' bitchy Marvel Ann's dance-off at the luau, and an hilarious performance from Six Feet Under's Lauren Ambrose as Florence "Chicklet" Forrest with a split personality disorder that turns her from dorky teenybopper to seductive dominatrix Ann Bowman (no relation).
Posted by reassurance at 2:16 AM