I'm taking a course on Werner Herzog right now and had to write a paper for tonight's class... so since I use this blog as a way to push my own writing skills and theories about film, I may as well post it here. On a side note, I think I need to come up with some new adverbs to circulate in my vocabulary. Thoughts on that or, even better, on the paper itself are, as always, encouraged. 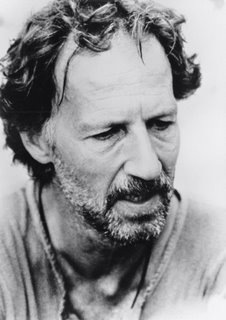 Since Werner Herzog himself makes no distinction between his narrative films and documentaries, it can be a bit troubling when approaching his idea of truth. Achieving complete objectivity in film is impossible. You can take Andy Warhol’s Empire as the closest thing to the idea of objectivity in cinema, but you have to take in consideration that he was the one who placed the camera in front of the Empire State Building. Therefore, complete objectivity does not exist there. In cinema, a director is credited for a documentary not just because he or she came up with the idea and conducted the studies, interviews, or whatever else was needed to complete the film. Instead the director is credited for the semblance of images and scenes as well as for the choosing of footage that will go into the finished product. Some documentarians aspire to be as impartial as possible; others (Michael Moore, for example) are not. So where does truth lie in Herzog’s so-called documentaries? 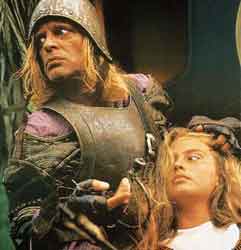 Herzog has always stated that there are levels of fiction and reality in all of his films. In Aguirre, the Wrath of God, for example, Herzog tells a tale of expedition in the Peruvian jungle during the sixteenth century. He pays close attention to period detail, especially the costumes and props, and literally threw his cast and crew into the jungle. The harsh conditions of the expedition are not dissimilar to what surely took place behind the scenes. However, there’s an even stronger element of fiction to this film. The realism of the period detail is eclipsed by the fact that our conquistadors speak German throughout the whole film. Werner himself wrote the “found” diaries of Brother Gaspar de Carvajal. For the sake of argument, Aguirre is a fictional narrative. 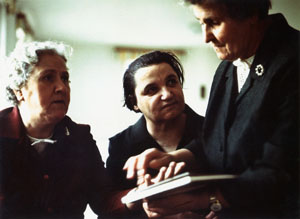 On the other side, Land of Silence and Darkness is essentially a documentary. Herzog turns his camera to Fini Straubinger, a woman blind and deaf since adolescence. His camera follows her visiting blind and deaf children, attending a birthday celebration, going to the zoo and botanical gardens. Land of Silence and Darkness adheres to general expectation of a “documentary.” It’s a rather traditional, non-exploitive expose of a particularly fascinating, real person. However, it was stated in class that not everything we hear is true. Fini tells a story about one of her fondest memories of sight, in which she speaks of a ski-jump competition. She speaks in vivid detail about the experience, but Herzog himself has admitted that he wrote that line and asked her to narrate it in the film. He did the same with another line, where Fini states “if a world war were to break out, she wouldn’t even notice.” Herzog wrote this line too. Is this deplorable manipulation? It’s manipulation for sure, but whether it’s deplorable or not is really up to the viewers themselves.


Our eye’s persistence of vision creates the illusion of cinema, but it’s the director who orchestrates that illusion. Herzog’s creation of two narrations in Land of Silence and Darkness does not prohibit our appreciation of the film. There are so many moments of a sad tenderness in the film that one cannot wholly dismiss the film for reasons of complete validity. Do they arouse thought and feeling toward the character of Fini? Of course, they do. The lines work in the context of the subject. While the opening scene with Fini, her “translator,” and her goofy friend might suggest a level of campiness à la Grey Gardens, but Herzog’s agenda comes clear as the film progresses. For the simple fact that he chose to make a documentary about her, one can see an admiration for Fini on Herzog’s part. Yet it’s in the film itself that we find out what sort of admiration he has for her. While one might argue that making a broad documentary about people who are both blind and deaf would not be as interesting as one about a single person, adding a more personal humanistic approach, Herzog is not a director who employs what is expected out of him or his subject matter. Instead, Land of Silence and Darkness is a film about the sadness and triumph of a particular woman. The camera does not follow her in a curious, exploitive way, but instead the camera looks upon her admirably, exposing her activism and good spirits despite her sizable obstacles. Herzog chose the footage he wished to be in the final version of the film, which is a form of manipulation, just as Warhol’s choice to place his camera in front of the Empire State Building. Surely, there are degrees of manipulation, and Herzog’s ranks higher than Warhol’s. With the inclusion of those fabricated lines of narration, Herzog expresses to us a further look into a world of sensory deprivation, pulling us in closer to the minds, not of Fini in particular, but of those others who have the same problem. Herzog is no James Frey. 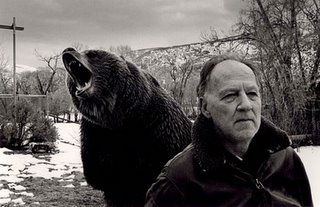 These elements of reality and fiction also directly relate to an appreciation of his latest film, Grizzly Man. What’s essentially Herzog’s essay about the relationship between man and nature, it’s also a document of a man’s demise at the hands of those creatures he’s trying to protect. There are a handful of interviews within the film, from former friends of Timothy Treadwell to environmentalists. One interview in particular, that of the coroner, seems particularly false. He addresses the camera almost in the same silly manner as Dracula might when introducing a midnight B horror film. He goes on to tell the camera about the audio footage of Treadwell and his girlfriend’s murder at the hands of the bear. The corner never misses a beat, and when he’s said all he needs to stay, Herzog’s camera zooms out to a shot of the coroner standing in the morgue. With this particular scene, I don’t know anything about the validity of this testimony. The coroner in fact might act like that; considering their job, one might even expect him to act in such a bizarre manner. However, the scene works completely within the film itself. Timothy Treadwell is an odd figure; he chose his obsession with living with wild grizzly bears to basically overcome his failure as an actor in Hollywood and battles with drug and alcohol addiction. This is an odd choice to most people. Why would someone chose to live in a constant state of danger like that? However, we only really get to understand how truly strange Timothy is through the footage he shot of himself. His monologues about the bears and his relationship with him are so strikingly bizarre that you almost feel uncomfortable watching him. He’s so strange that you can almost dismiss his decidedly naïve and politically incorrect rants about women or about homosexuality. These are just further tools in getting inside a man who would chose to live his life in such a way.


The footage of the coroner, whether fabricated or not, works within the context of the world of Grizzly Man. By editing together the video tapes Timothy filmed before his death, we’re taken into a foreign world that’s bizarre and unsettling (especially to a city boy, like myself). Therefore, it comes as no surprise that two weirdos like Timothy Treadwell and that coroner would coexist within this world. Timothy’s former girlfriend and partner in wildlife activism also fits perfectly in this world. There’s a strange curiosity about the way she holds herself and reacts to certain things, most notably when someone gives her Timothy’s watch and she cries, “it’s the only thing left.” I, and probably most of the people I know, have never encountered people like her, like Timothy, or like the coroner, and though Herzog has surely lived a more strange and worldly life than I have, he too does not relate with these people. His narrations frequently contradict or disagree with things that Timothy says, especially on the subject of the balance of nature. He does not sympathize with Timothy as much as he uses him as a counter-example of his own personal beliefs about man’s relationship with nature. But since this is a film, he can manipulate the audience as he chooses. Whether the coroner or the ex-girlfriend are putting on an act for the camera or if Herzog requested them to do so doesn’t matter. He has created a world through his film, like Land of Silence and Darkness, where factual elements don’t really matter. 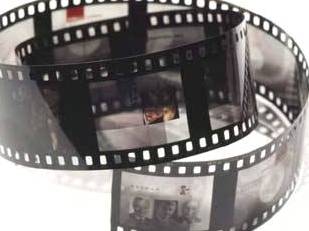 When you boil everything down, you realize that Herzog’s play on reality and fiction don’t really destroy the magic of his vision (and, boy, is that photo of a strip of film I included lame). In certain situations, like Aguirre or Fitzcarraldo, his elements of reality are cause for a greater appreciation. His type of almost guerrilla filmmaking doesn’t exist anymore in the world of blue-screens and CGI. The audience, the character of Fitzcarraldo, and even Herzog himself marvel at the same time in the fact that they actually got that boat over the mountain. Yet, when people hear about a scripted line in a film they assume to be a documentary, they’re outraged. It’s a rather strange balance when you think of how someone might react in either situation. But these questions of definition (What is a documentary or a memoir?) and the nature of reality (In the form of media, is there so such thing as the truth?) are especially relevant today. Herzog is, at the very least, a master at adjusting and challenging our popular notions of both cinema and truth. Through both Land of Silence and Darkness and Grizzly Man, the lines of fact and fiction are crossed (or are they?). But doesn’t this all make sense in a medium where a flaw in our own eye allows us to see still frames create a moving picture?
Posted by reassurance at 4:34 PM

I congratulate you for this decision, when you finish this course, you had more and better knowledge about movies, with this you could emit a best judge about movies.