A little late for Valentine's Day, First Run Features is reissuing a handful of Radley Metzger's films individually on DVD today. Often referred to as the counter of Russ Meyer, Metzger was probably the king of American art-house erotica in the 1960s and 1970s.

The Lickerish Quartet (1970) is regarded by some as his masterpiece. And though three of his prior films (the lesbian romance Therese and Isabelle (1968), his erotic adaptation of the opera Carmen entitled Carmen, Baby (1967), and somewhat kinkier Camille 2000 (1969), by the time The Lickerish Quartet hit theatres, the discerning film-goer knew who he was. A nameless upper-class family of three (father, mother, son) become enthralled by a circus biker chick (Silvana Venturelli) whom they invite to watch a 'blue movie' with them. The woman, credited as 'the visitor,' is not a lusty tough-girl in the fashion of Meyer's Faster Pussycat, Kill! Kill!, in fact her character is far more reminicent of the Terence Stamp's "visitor" in Pasolini's Teorema. She's a mystery that's never solved, but not without becoming the object of the family's sexual fantasies. 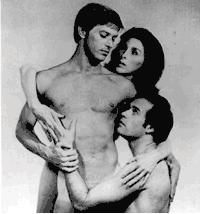