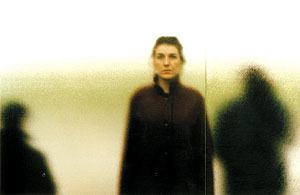 I'm kind of sick, though I've only done it three times prior, of mentioning all the notable or, in the case of Elizabethtown, not-so-notable films releasing on DVD each week. I just find I'm not clever enough to have some witty sentence or two about each of the films. Just for Valentine's Day, Home Vision released Elle est des nôtres, a film that would oddly fit with my Enigma of Kaspar Hauser and Bad Boy Bubby double-feature. So if you're up for a triple-feature, here's your gal. Like Kaspar and Bubby, Christine (Sasha Andres) just can't fit in with the world. She's a social cripple and, like our two other friends, likes to mimic dialogue and experiences from others and pull them off as her own. It's her only way of successfully communicating outside of her world of temp jobs and solitude. Eventually, she becomes one of "us"... or, more specifically, them. The collective "us" is always a "them," as she conforms to both office and social politics -- turning from wide-eyed and creepy to cold and cruel, and finding herself a man. This is Alnoy's first film and, though admirably eerie, you can tell. She composes several shots to be blatantly "arty," (above) though her cool plasticity and use of the ugliest hue of red you'll ever see work stylistically in the rest of the film. Christine has a fascination that's quite comparable to Kaspar and Bubby, yet while Kaspar's story is sad and Bubby's is darkly humorous, Christine's is coldly French.

Instead of making the weekly DVD summaries, I'll just tell you about some DVDs you should be looking forward to. 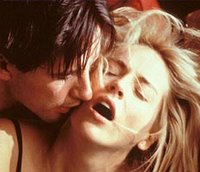 Oh, how Joe Eszterhas-crazy I am. Here's the middle-child of his Hollywood sex opuses (we'll just forget about Jade), putting Sharon Stone in the Roman Polanski/Tenant role as a publishing exec who has a striking, murderous resemblance to her apartment's slain former tenant. Truly a despicable motion picture, but it holds a little soft (or is it..... I'll stop there) spot in my heart after watching it late night as any ten-year-old Catholic schoolboy shouldn't. I actually double-featured this with another painfully awful Hollywood sex bomb, Body of Evidence. And that Enigma song... boy. I may just have to pick this one up.

What a brilliant cover. I mentioned this a few posts ago, but I don't want you to forget.

Probably Claire Denis' most highly acclaimed film, even more so than Beau travail -- yet also probably her most cinematically ignored.

Nuns gone wild. Unfortunately these nuns don't go nearly as wild as they do in Ken Russell's The Devils, as both films are based on The Devils of Loudon.

These are just a few titles worthy of getting excited about (well..... it's your call with Sliver). I'll try to draw attention to other notable DVD releases as they become available to me.
Posted by reassurance at 8:17 AM