As I have nothing lengthy or terribly insightful to say at the moment, I thought I'd just run my mouth (er, fingers) off on what's going on in my head cinema-wise. 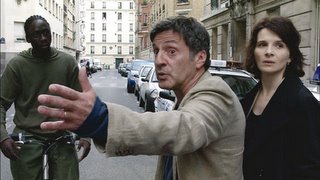 I'd first like to talk about Michael Haneke, who I am finally understanding to be just about the greatest working filmmaker out there. I saw his latest, Caché, this evening 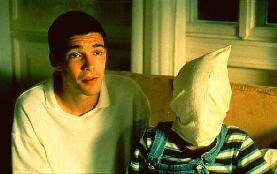 -- and it might just make its way onto the top slot of the Best of 2005. Haneke is a genius at giving you all the clues you need without ever really mentioning what the underlying problem is. He also has a strange capacity to intellectually rape you (you know, in the good way) and viscerally enthrall and horrify you. There's so much I want to say about this film but I think I'll save it for a later time. On another Haneke note, Kino recently announced the DVD releases of four of his earlier films for the 16th of May: The Seventh Continent (Der Siebente Kontinent), Benny's Video, 71 Fragments of a Chronicle of Chance (71 Fragmente einer Chronologie des Zufalls), and a rerelease of his glorious, shocking Funny Games (pictured to the right). 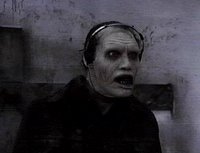 After my post about double features, my friend Tom suggested a rather interesting, bizarre double feature: Robert Bresson's Au hasard Balthazar and George A. Romero's Day of the Dead. You wouldn't think a film about a beloved donkey and an apocalyptic zombie film would go so well together. Per his request, I shall be watching the both back-to-back (though I've seen them before) within the coming weeks. So get excited.

With the upcoming release (and subsequent tanking) of Basic Instinct 2: Risk Addiction (what a wonderfully terrible title!), I've been dreaming a lot about Paul Verhoeven. He hasn't made a film in six years since the oh-so-bad-but-not-in-a-good-way 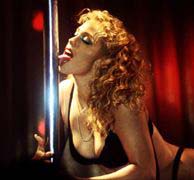 Hollow Man, and I read he's working on two war films right now.... So really all I can do (since I have no desire to see another Verhoeven war film) is go back and watch some of his tastier treats like The 4th Man (De Vierde man) or Flesh & Blood or... his masterpiece, Showgirls. My friend just purchased the V.I.P edition of Verhoeven's gem, and I'm finally going to get to the bottom of why Showgirls is so profoundly brilliant in its horrific excess. If I can't, at least I'll have another excuse to see Elizabeth Berkley lick that pole, talk about eating Doggie Chow, flop like a dead fish in the pool, and kick some serious rapist ass! But, seriously, Basic Instinct 2 better be as big of a trainwreck as I hope it to be. 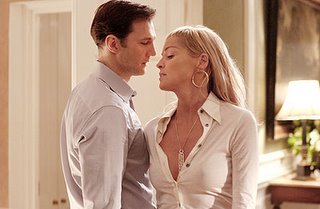 Posted by reassurance at 3:04 AM