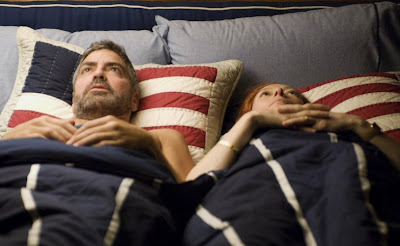 Perhaps I was a bit hasty in declaring last year that the Coen brothers had never made a bad film around the time I saw No Country for Old Men. Or maybe my “hastiness” was just a way for me to avoid coming to terms with the fact that I really don’t like The Big Lebowski. Lebowski aside, throwing Burn After Reading into the mix doesn’t help that statement, but I still have reservations in calling it a “bad film.” I know there are those who think Jim Jarmusch can do no wrong, but I have no qualms in shit-talking his episodic endeavors, whether they be of the literal sense (Coffee and Cigarettes, Night on Earth) or weaved through a “narrative” (Broken Flowers); I do, on the other hand, find Mystery Train amusing. However, I think the Coens are consistently conscious of their decisions, more so than Jarmusch who sometimes appears to be as lost as Bill Murray’s character in Broken Flowers during the film’s last moments. 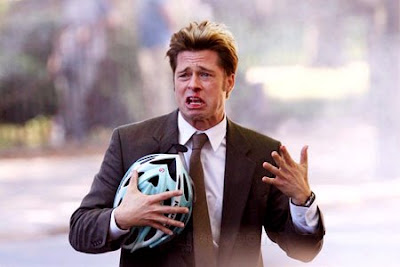 What’s truly holding me back from bashing Burn After Reading can be found precisely in J.K. Simmons’ role, which vocalized within the film my uneasy sideline sentiments for the “mayhem” that was taking place. Did the Coens realize midway through the process of making Burn After Reading that it was lousy and threw in Simmons to trick you into thinking they were ahead of the game? Unfortunately not. I have too much trust in the brothers to think it wasn’t their plan all along, particularly considering the final scene of the film. And still, two or three scenes with Simmons doesn’t detract from the silliness (and, to my surprise, staleness) of what was transpiring around him. I can’t even muster a small appreciation for seeing talented actors like Frances McDormand and George Clooney appear to be having fun at their job, as it feels like Clooney and Brad Pitt just brought their Ocean’s 11 party over to the next set. Even my darling Tilda Swinton failed to crack a smile out of me, which is truly disheartening considering she plays a cold bitch so well. I think I’ll let the film settle (though I watched it over a week ago) and debate a second viewing, for those Coen brothers sure enjoy delivering the unexpected with each passing film.

Posted by reassurance at 4:58 AM

This wasn't at all what I expected -- the trailers made it look like a rioutous straight-up comedy -- but I liked it a lot more than you did. Like you, I think J.K. Simmons made the film, providing this wry satirical commentary on everything else that was going on. The corridors of power are completely disconnected from what's going on in the rest of the film, and there's a complete disregard for human life that runs through the whole thing. Also, it wasn't as hilarious as I expected but I appreciated its deadpan sense of humor, and I thought both Clooney and Pitt had some great moments.

I enjoyed Clooney playing against type, though I wasn't especially amused by Brad Pitt, playing a character he probably would have done around Thelma and Louise era. But I think you mentioned something that I was overlooking... perhaps the biggest problem with the film was that it just wasn't very funny.

I gotta say, this movie requires at least a second veiwing. I really liked it the first time, but it wasn't FUNNY until the second time. I've now seen it 4 times and I laugh more at each viewing. It really is hilarious.