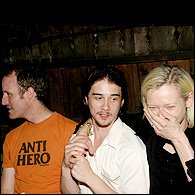 Big surprise, I watched Thumbsucker. Bigger surprise, I included a photo of Tilda Swinton in this review (pictured above with director Mills and costar Pucci... I chose not to include a photo of the director with Miranda July for obvious reasons). But probably the biggest surprise comes from the fact that the film really isn't nearly as bad as it might have been. Now, I haven't read the book, nor do I really plan to. As I told a friend of mine the other day, the book belongs in a sort of subgenre of books, which include Prozac Nation and The Perks of Being a Wallflower, all of which appeal to a certain just-into-college mentality that I do not hold. Not that either of the books listed above are bad per se; they work for what they mean to work for, and there's something to be said for that. Thumbsucker, as a film, works differently though. It's a part of the American independent film onslaught that we get, ripped from Sundance every year. I guess it's a good thing the whole Tarantino phenomenon has blown over, but, never fail, the world of young, hip American filmmakers has chosen another god in Wes Anderson.

My feelings on Wes Anderson are not simple. I think Rushmore is rather brilliant, though it appears as if Anderson, only on his fourth film, has already started making parodies of his own work. Thumbsucker interrupts the narrative flow with pastel pink backgrounds of its hero Justin (Lou Taylor Pucci, the cut up hitchhiker in the Fairuza Balk segment of Personal Velocity) sucking his thumb and opening magical boxes. The soundtrack is shamelessly hip, featuring The Polyphonic Spree and Elliott Smith covering Cat Stevens. Smith crooning to Stevens' "Trouble" may call to mind Harold & Maude and our lead character may remind us a bit of Bud Cort, but really the similarities go no further. (Probably because Tilda's the only one in the cast who can command the screen as well as Ruth Gordon did.) All the uber-hipness aside, Thumbsucker actually succeeds for several other, important reasons.

Let's just get my Tilda drooling over with first. Though she emerges as the best thing in a number of the films she's in (Young Adam, Constantine), she happens to be oddly complacent in this film to its fullest effect. It's as if she spotted something in Thumbsucker that she didn't in the other films, and decided to let the film go as it pleases, instead of taking control of the ship. And she does subtlty well! Her Audrey actually feels of this earth, grounded and (believe it or not) boring. All of this may sound like criticisms, but as you know, I hold Tilda in the highest regard... and she does what she's supposed to... well. Vince Vaughn (another shocker) doesn't ham it up as you might expect, and Keanu Reeves' bad acting feels perfectly suited to his ridiculous orthodontist, the only character in the film that feels farcical. And while Tilda is enough for me to like a film, Thumbsucker works because, despite its elements of unabashed hipness, of its earnestness. Usually this is poison in my book, but when you're used to filmmakers who've turned irony some sort of sub-art form, sincerity can emerge as a breath of fresh air. It should be said as well that the film wouldn't have worked without Lou Taylor Pucci's central performance. He works within the spectrum of this film as well as Jason Schwartzman does in the irony and sadness of Rushmore. Without his sincerity, Thumbsucker would have gotten sucked into the "indie flick" abyss... and though it probably won't be remembered in a few years, Thumbsucker shows us (or maybe just me) that earnestness doesn't have to be the arsenic your wife slips in your coffee. 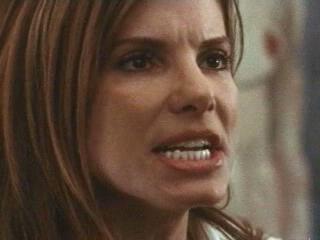 Oh, HELL NO. The Oscar nominations came out this morning, and guess what, fucking Crash was nominated not only for Best Original Screenplay, but best-fucking-picture. Best-fucking-picture!!! I wish the Razzies weren't so painfully obvious, or they might have done the honors of having Crash as the first film to be nominated for both best and worst film in the same year. Paul Haggis must have paid off or fucked the right people in Hollywood, because this is just ludicrous (no fucking pun intended). Ludicrous isn't even the right word for it -- there isn't one. And who chose William Hurt to get the supporting actor nomination instead of Ed Harris in A History of Violence? And while Crash's nominations may be the biggest sham of the Academy this year, their exclusion of Grizzly Man in this year's best documentary category is unforgivable. Read this. Hey, maybe if Crash wins some shit, I can actually do something other than roll my eyes at Nicole Kidman this year.
Posted by reassurance at 2:26 PM

Grizzly Man didn't deserve to be nominated. The only thing that makes that film interesting is the fact that those lunatics were eaten. Without that, it's stock bear footage, basically.

Crash was awesome, by the way.

Since your statements about Grizzly Man and Crash are rather vague, I find trouble defending my opinion on either film.