Although it has little in the way of competition, The Descent is hands down the decade’s best English-language horror film. More than the “boo” scares or nausea-inducing gore of its peers, Neil Marshall extends The Descent beyond those easy tricks (not to say the film doesn’t have a pair of cheap startles or gross-out effects). A creature feature at heart, The Descent’s real “beauty” is the claustrophobic nightmare Marshall designs around his heroines. Female genitalia analogies aside, the cave, into which the six thrill-seeking gals descend, becomes the malevolent villain, equipped with darkness, daunting cliffs of unknown depth, miniscule crevices of questionable stability and the capacity to destroy its own exits and entrances. That blind, human-looking monsters dwell within it seems like one of its lesser deterrents.

Marshall knows what most horror directors should by now: gore alone won’t disturb your audience. By the time The Descent made its way to the US (with a dumb, but ultimately inoffensive add-on at the end), people were already gearing up for the third installment of the Saw series. The Descent certainly has a bit of disgusting flesh and organ eating, but he recognizes that true horror is made up of more than just an edible spleen. Truly, the most lip-biting, nails-in-the-palms sequences are when the girls have to climb across the ceiling of a pit to get across or when one graphically injures herself after tumbling through one of the cave’s many abysses.

Most of the characters are expendable, except for the Sissy Spacek-looking Sarah (Shauna Macdonald) and the excursion organizer Juno (Natalie Mendoza), but this doesn't make the deaths any less disturbing, even if it was easy to predict that the first to perish would be the overzealous lesbian-in-denial. The monsters do provide one or two moments of fear for the audience, specifically the first time the girls see one (which was stupidly shown in the TV spots), but it’s the frenzied action of the girls’ retaliation that’s more ruthless and exciting that the monsters themselves. Marshall knows that fear rests in the unknown, so editor Jon Harris cuts the action sequences rapidly to a point of raucous frenzy. This may not have worked in Batman Begins, but it does here. Keep your benzodiazepines handy, because The Descent is the sort of grueling film experience most of us have only heard tale of.

I’ll probably spend the remaining days of October looking at the some of the decade’s best offerings in the horror genre, which started over the weekend with Dario Argento’s Mother of Tears. If you want to play Decade List horror movie catch-up before Halloween, I’ve already covered Citizen Toxie: The Toxic Avenger IV, Alejandro Amenábar’s The Others, Claire Denis’ Trouble Every Day and Marina de Van’s In My Skin [Dans ma peau]. Expect the film adorning the header of my site next. 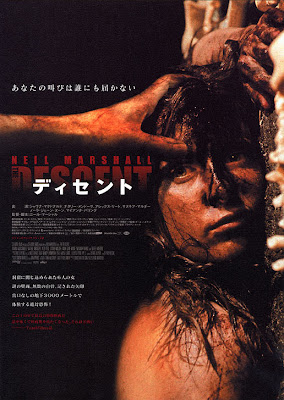 Saying the American cut has "a dumb, but ultimately inoffensive add-on at the end" suggests that you don't understand how the movie was actually gutted.

The U.S. theatrical version ended with the gotcha! "happy" ending. Everywhere else in the world, the movie continued back in the cave after her "escape."

I wrote this: "If you saw the version of The Descent that was released in American theaters, you saw a lesser movie. The only thing missing from the American cut is the coda, but it brings the story back around and justifies the inclusion of little things — you know, the beginning, a recurring interest in a dead child. Without its original ending ... the movie is still terrifying, but it concludes on a cheap, dumb, obvious note, and what meager character context there was is left hanging there, like so many disemboweled entrails."

That makes more sense. In fact, until you mentioned it, I really didn't give much thought as to how the American and international versions differed. I forgot about that image of the Sissy Spacek-looking gal with the birthday cake. Thanks for clearing that up!

A very nice informational blog.Keep on making such important blog post.Your work is really being appreciated by some one. hcg