Fans of François Ozon, once dubbed the garçon terrible of French cinema in the late ‘90s, seem to diminish with each passing film. Though few will argue that the year 2000 marked the highest point of his career (with Under the Sand and Water Drops on Burning Rocks both bowing in that year), I haven’t fallen off the bandwagon, despite a number of reservations I have toward his two most widely-seen films, 8 Women [8 femmes] and Swimming Pool, both blissfully entertaining but severely lacking beneath their polished veneer. Ozon’s thematic sequel to Under the Sand, Le temps qui reste (correctly translated as The Time That Remains), shares the same traits that bothered me about 8 Women and Swimming Pool, but they feel like less of a disguise here.

Le temps qui reste, 8 Women and Swimming Pool all follow closely to their own genre allusions; more than its predecessor, Le temps qui reste pays tribute to melodrama, a genre which Ozon has always toiled with in smaller doses. In the film, Ozon gives himself completely over to the idea, dislodging the tongue-in-cheek sensibilities of his previous flirtations with his Sirkian tendencies. While much of the film relies on artifice, I sense a peculiar, refreshing honesty in what Ozon’s trying to do.

While he situates an attractive gay male in central role, a position often held for women in the genre, Ozon doesn’t set his sights on redefining or updating the genre. While spotted with bits of superficiality (Melvil Poupaud seems to get more handsome the closer he gets to death), the moments of beautiful clarity truly resonate. From the point early in the film when Romain (Poupaud) discovers he’s a few months away from death as a result of a spreading tumor, the film follows his grief process through the designed closures Romain concocts for the people closest to him, some successful, others not. For his unhappy, older sister Sophie (Louise-Anne Hippeau) and his younger, German boyfriend (Christian Sengewald), Romain uses his remaining time to sabotage these relationships, while finding a solitary comfort in his grandmother (Jeanne Moreau), the person in the film he finds the closest bond, both in personality and in approximation to death.

While Ozon does strive on some level to avoid overt sentimentality, it’s more accurate to say that he keeps his drama on a low flame. I hope my friend Tom doesn’t mind, but he highlighted one of the biggest complaints I’ve heard about Le temps qui reste in an e-mail exchange earlier this year. He said, “Ozon's formal restraint may have suited his subject matter, but… I thought a showier technique wouldn't be so much inappropriate as less bland.” Perhaps it’s in Le temps qui reste’s blandness that I find the “honesty” I think Ozon is producing. In keeping the film on the subtle(r) side, Ozon delivers a number of rich moments, especially when Moreau is onscreen, that the showiness he painted 8 Women and Swimming Pool with would have only clouded. Le temps qui reste isn’t a grand triumph for the director, but it’s one that has always lingered for me, whether I can successfully defend my feelings or not (likely the latter). 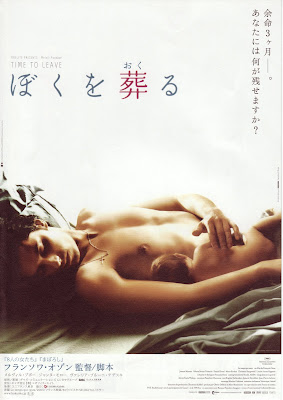 No, I don't mind at all! Quite proud to be quoted, actually.

I may go back and rewatch this. I really loved both Under the Sand and Water Drops on Burning Rocks, and now that I'm a bit more on Ozon's wavelength, perhaps I'll appreciate it more.

I was actually a bit underwhelmed this time around (I almost didn't include it)... and maybe it comes through in the fact that I find little defense for some of the problems in the film, all of which you succinctly pointed out in your e-mail. Other than Jeanne Moreau and, in my opinion, Valeria Bruni-Tedeschi, all of the supporting characters do leave too much mystery to actually be mysterious. Not that I think that was what Ozon was going for.

But, Le temps qui reste is no Water Drops on Burning Rocks or Under the Sand, that we both know.