When first learning about literature, children are always taught that a good story has a beginning, middle, and an end. What they aren't taught is that, often, stories can be a lot more fascinating if you forego the former and the latter. Presented by longtime champion of world cinema appreciation Martin Scorsese, Emanuele Crialese's Golden Door (or New World, the direct translation from Italian) slights the audience on a traditional opening and closing, focusing with acute detail on a midsection of a tale of Sicilian immigrants on their way to the United States at the turn of the century. It would almost seem fitting that the weaker areas of the film take place when attempting to provide groundwork for the central family before embarking on the trip and that the finest moments focus on the journey. Golden Door is an adventure film without a clear destination in sight. Certainly, there's a literal finishing point (Ellis Island), but Crialese prefers the excitement of the expedition considerably more than the trophy at the end.

Salvatore (Vincenzo Amato) is a father of two boys, one a young man on the cusp of sexual awakening (Francesco Casisa), the other a curious mute (Filippo Pucillo). After receiving what they believe to be a sign from God, the three men, along with their witch doctor grandmother (Aurora Quattrocchi) and two other young women, embark on a journey to a mysterious land of opportunity. On the boat, however, they encounter an attractive English woman (Charlotte Gainsbourg) in search of a husband to allow her admittance into this new world. A widower and single father, Salvatore accepts her proposal, though she speaks little Italian and he, little to no English.

Long considered dead, or at least dormant, after cinema's glorious heyday in the '60s and '70s, Golden Door is probably one of the strongest films to come out of Italy this decade. Instead of depicting the bleak realities of death, famine, and despair on the long oceanic journey to America, Crialese fills his film with jubilation, and with an amusing surrealist touch. Kudos should also go to Agnès Godard, one of the most visionary cinematographers in European cinema today. Her images reach a sublime divinity in composition and clarity. Similar to her work with Claire Denis (Beau travail) and André Téchiné (Strayed), her artistry elevates Golden Door to awe-inspiring heights. With the combined forces of Crialese and Godard, Golden Door is a lush, joyous cinematic experience of a size Italian cinema has been lacking since the days of Antonioni, Fellini, Bertolucci and Pasolini. 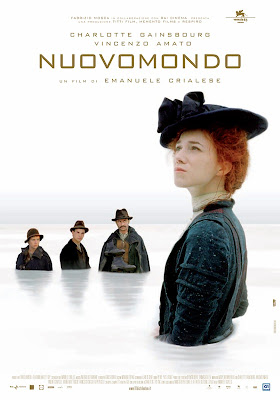 I am happy to find this very useful for me, as it contains lot of information. I always prefer to read the quality content.hcg