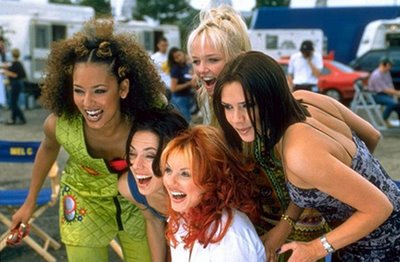 Get a sense of humor. The mere mention of both Spice World and From Justin to Kelly attracts scowls from hell, as if I had just made a joke about someone's dead grandmother and the Holocaust. The Spice Girls and American Idol? I may as well turn in my film criticism resignation, eh? Unfortunately, I shall not... and here, I shall defend both films as enjoyable trash. This will be a nice diversion from my admittedly snotty 100th film post. First off, I will say I was never a fan of the Spice Girls during their hayday, nor have I ever seen an episode of American Idol... but I'm not saying this as any sort of defense of my integrity, but for background purposes only. Spice World, with all its frivolity, throws us back to the days when pop groups made silly films that exposed nothing of the people involved in the music, but a world where these "musicians" act as their media personalities. Most people would throw up at a comparison to A Hard Day's Night, but is that simply because The Beatles are "respected" artists and the Spice Girls are merely a record exec's test-tube creation? Sure, a comparison to The Village People's Can't Stop the Music is closer in accuracy, but only because of the musical stylings. Seeing the Spice Girls run around, going to dance boot camp or being approached by aliens that want their autograph, is not like seeing the Beatles run amiably from their fans, yet who can say that the Spice Girls' brand of pop doesn't lend itself to such silliness? 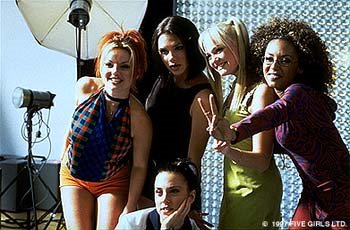 The Spice Girls never function as human beings in Spice World, but as their personality creations... and even then, they only operate as parts of a single entity. They each have their own quirky traits but never really exist individually. A friend of mine compared their existence in the film to a race of aliens on Star Trek (which I have never, and will never, watch) who are all controlled by one mind. One of their friends (actually, their only friend... an Asian girl, of course, as the eastern hemisphere is not represented in their group) is pregnant and asks all of them to be the collective godmothers (the baby, which is conveniently born when the Girls realize their career isn't as important as friendship, is not surprisingly a girl, bringing one of them to remark about some serious "girl power"). Even when Spice World takes turns for the dramatic (the childbirth and the scandal where their boat tips over when the Girls are singing "My Boy Lollipop" with two 10 year old fans), it strangely works because of its lack of necessity. There is nothing that is necessary about either The Spice Girls or the film; they are candy-coated calories. 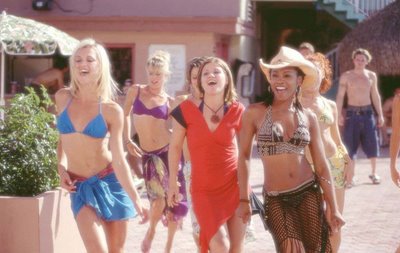 From Justin to Kelly is probably even more unnecessary than Spice World, but there's nothing wrong about that. It's a "star-vehicle," pairing the two most popular American Idol finalists in a ridiculous beach romp, à la Frankie and Annette, only with more classless sexual innuendo. In fact, From Justin to Kelly oddly plays out like an 80s soft porn film, with the sex replaced by large choreographed singing-and-dancing numbers. Justin and Kelly end up alone on a boat together, where we'd imagine the two would release their sexual urges for one another. Instead, they sing. Another scene has a trampy girl storming out of a dance-club where she finds herself in a dark alley with a bunch of scary men. Here, we should have the dramatic rape scene, but... you guessed it, more singing and dancing. The singing and the dancing are particularly unmemorable, but maybe their music just isn't my cup of tea. 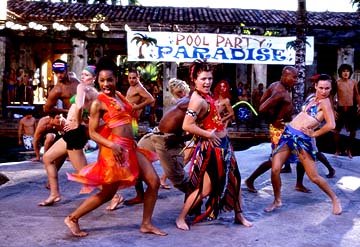 The scowls I received and will probably receive after writing this are unfounded. Both films are examples of movies whose shitty reputations come from the easiness of their condemnation. The Spice Girls were all over the place, American Idol was becoming a cultural phenomenon -- and both films were throw-backs to musical subgenres that we only laugh about now. It's sort of the same case for something like Gigli, a notorious disaster that really didn't live up to its piss-poor reputation. Sure, it's lousy, but the hatred for it was all a cause of people's distaste for the overexposure of both Jennifer Lopez and Ben Affleck. Was it any worse than the shit that passes as Hollywood cinema any more? No. Spice World and From Justin to Kelly are throw-away films, neither of them worth seeing for non-fans. But, as a non-fan, I can assure you that both films are pretty unfairly tossed around when mentioning some of the worst films of the past 10 years. I repeat, get a sense of humor.
Posted by reassurance at 4:59 PM

When I had the flu it seemed like Spice World was on three times a day. And I watched it a few times and enjoyed it as well.... maybe not as the entity they wanted it to be.

I agree. It seems like critically and publically, films are blasted simply because it's an easy target, or it's the popular idea to follow. I guarantee you that in 5 years, perhaps less, nobody will remember "Gigli." I only remember it simply because it was less of a dissapointment than I wanted it to be. The same can be said for "The Da Vinci Code," which I assure you I'll probably be neutral about, and I doubt with the expectations people would have loathed so much. I will, however, vividly remember being assfucked by something like "The Forgotten" because there was no preconceived notion, and I actually hoped for a sleeper.