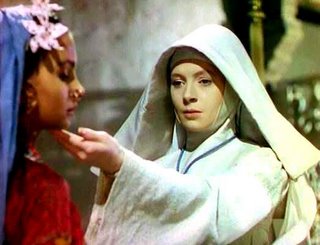 Is there anything better than saucy nuns? Or a saucy nun melodrama? Powell & Pressburger's Black Narcissus may not rank in seediness with the likes of Ken Russell's The Devils or Walerian Borowczyk's Behind Convent Walls (Interno di un convento), but it's certainly as fiery. Deborah Kerr plays the ice queen, Sister Clodagh, assigned to run a school and hospital in the Himalayas (actually, a rather astounding soundstage), once inhabited by concubines. One would imagine the concubines to haunt the walls of this palace, but instead, it's simply the pretense for the nuns' forbidden longings to come to the surface. Contrary to most nuns-gone-wild tales, it's not the claustrophobia or seculsion that brings about their passion, but the open spaces and the wind. I read that most of these longings and the explosive climax to the film were cut for its original US release in the late-40s in order not to offend the Catholics. This is unfathomable after watching it, but I suppose the US audience was supposed to just marvel at the absolutely glorious Technicolor, aided by cinematographer Jack Cardiff. For more English-produced Technicolor epics set in India, check out Jean Renoir's The River.
Posted by reassurance at 11:08 PM