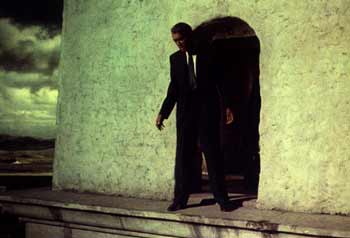 Fucking hell. I really should have planned this out before posting the previous two blogs, as I've criminally forgotten some of the most influential films in my continuing exploration of cinema. From Vertigo, Night of the Hunter, Nicolas Roeg's Performance, Last Tango in Paris, and City Lights to Irma Vep, Radley Metzger's Score, Humanité, The Unbearable Lightness of Being, and Ken Russell's The Devils... I should be shot for neglecting to include these films. Many times. (I will try to focus on this unforgivably negligence films once I finish these posts) Anyway, here we are, off to college where, if I wasn't drunk, naked, or telling a bunch of fat girls to quit fucking in the room above me while listening to Missy Elliott, I was watching films. Most of what I'm listing are films most college kids are supposed to see. And while certain people I know like to reject the "cannon," these all have had a lasting effect on my obsession. 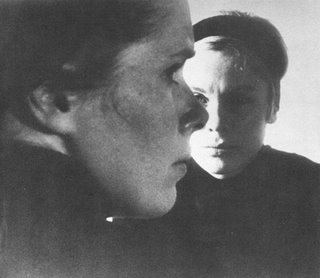 1. Persona - dir. Ingmar Bergman - 1966 - Sweden
Going into college with a knowledge of Bergman is always recommended, as most freshman respond to the question "Do you like Ingmar Bergman?" with "Who is she?" So I did my research beforehand and sat at my work on a Monday morning, sitting on the counter watching Persona in complete rapture. I'd never been so blissfully puzzled and amazed at a film... probably ever. (Note: puzzlement will play a big part in this list) 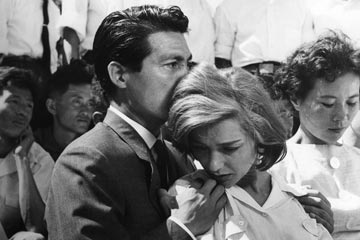 2. Hiroshima mon amour - dir. Alain Resnais - 1959 - France/Japan
I'd read Duras' L'amant by the time I got around to this film and already lost faith that her words wouldn't translate well to the screen (see the film adaptation), yet how wrong I was! Passion personified. 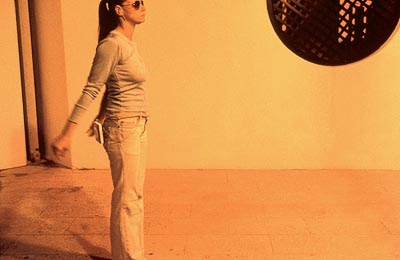 3. Morvern Callar - dir. Lynne Ramsay - 2002 - UK
To this day, Morvern Callar is the little place I like to crawl into when I need to disappear. Everyone should have that film, right? I was sort of at a loss for words when I first saw it (see, puzzlement), but Lynne Ramsay's camera on Samantha Morton's face never left my mind afterward. 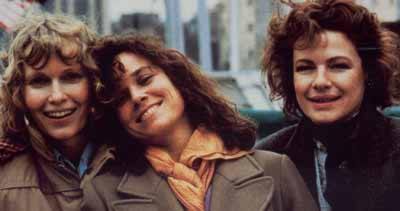 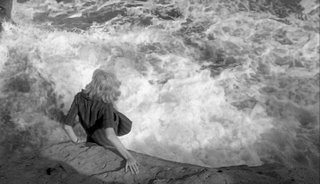 5. L'avventura - dir. Michelangelo Antonioni - 1960 - Italy
It's rather telling of college students these days, when Antonioni is ignored in a Film History class because his films scare off (or bore the fuck out of) the kids. In a way, L'avventura is like Hitchcock's Pyscho; you will never be able to appreciate it as your parents, or grandparents, would have been able to. Yet, now that the controversy has subsided, both Pyscho and L'avventura are remarkable essentials in the study of film and craft. Plus, if you like Antonioni, it's a lot easier for you to get in my pants. 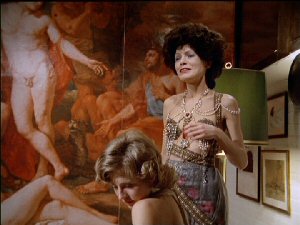 6. The Bitter Tears of Petra von Kant (Die Bitteren Tränen der Petra von Kant) - dir. Rainer Werner Fassbinder - 1972 - West Germany
I'm noticing a trend in the list already: essential films and filmmakers ignored in my history of film classes. Hiroshima mon amour was axed for Godard and Truffaut. Antonioni was replaced by two Fellini films. And Fassbinder was left out of New German Cinema (Herzog and Wenders were chosen instead). Thankfully I'd watched Fassbinder on my own prior to taking the class, and though it's certainly stagey (and I loathe theatre), The Bitter Tears of Petra von Kant was, to me, his masterpiece. Though the endlessly-bland Hanna Schygulla was often his gal of choice, I always had it for Irm Hermann. Of course, Margit Carstensen, as the hopelessly manic Petra, is wonderful too. 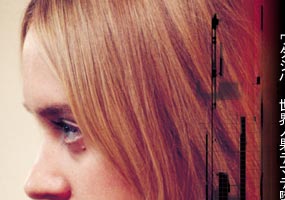 7. demonlover - dir. Olivier Assayas - 2002 - France
Sure, demonlover is a mess, but it has everything I want in a film: a score by Sonic Youth, cat fights, Chloë Sevigny speaking French, Gina Gershon wearing a T-shirt that says "I Heart Gossip," and Japanese techno bars. If you give awards out for ambition, give a few to demonlover. 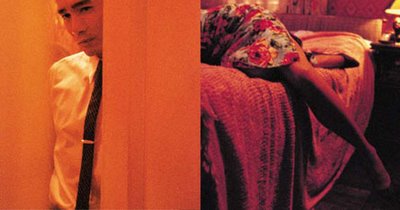 8. In the Mood for Love - dir. Wong Kar-wai - 2000 - Hong Kong/France
Um, have you ever seen a film this beautiful before? I'd previously been impressed with Chungking Express, but it certainly didn't match the majestic, enchanting, heartbreaking In the Mood for Love. Sometimes I just want blown up stills from this film plastered all over my walls. 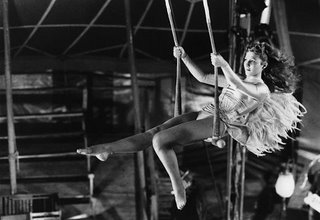 9. Wings of Desire (Der Himmel über Berlin) - dir. Wim Wenders - 1987 - West Germany
My friend Tom told me that someone described Wings of Desire as a film that "appeals to the undergrad in all of us," which is about the most accurate description of this (or really any) film I've ever heard. I'll still never figure out how a film that plays like a poetic essay about alienation in a city divided in two could become a Meg Ryan melodrama. 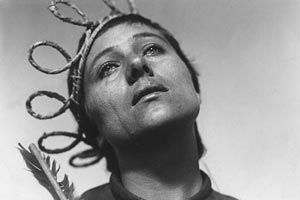 10. The Passion of Joan of Arc (La passion de Jeanne d'Arc) - dir. Carl Theodor Dreyer - 1928 - France
Another theme: PASSION. Red-blooded, fiery passion. When I become an actress, I'm going to do what Maria Falconetti did and only star in one film... and make it history-book memorable. 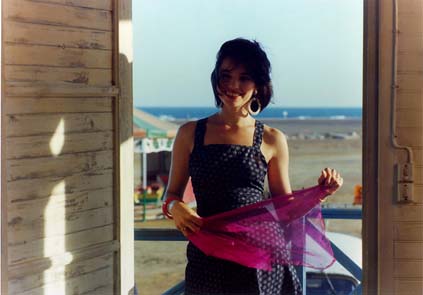 11. Betty Blue (37°2 le matin) - dir. Jean-Jacques Beineix - 1986 - France
It was always all about you, Betty. So much so that English-speaking countries changed the title from, literally, 37.2 Degrees in the Morning to your name. Who can tame the fire and passion within your soul, Betty? You know, speaking of passion and performances, if Béatrice Dalle had quit acting after her debut performance here, she, too, might have been regarded as Maria Falconetti is. But then we wouldn't have gotten the chance to see her eat the flesh of teenage boys in Trouble Every Day or brilliantly flip out in Time of the Wolf. So, maybe it's worth it, but you'll always be Betty Blue to me. 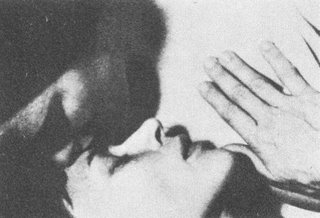 12. Cries and Whispers (Viskningar och rop) - dir. Ingmar Bergman - 1972 - Sweden
I had a lot of problems putting this one on the list, as so many worthwhile films are getting the boot because I've included two Bergmans. But you must understand that Ingmar Bergman meant (and means) to me even more than Star Jones gossip means to you. Can one really make the claim "[insert Bergman film] is his most devastating?" I don't think so, but Cries and Whispers has to be top three. 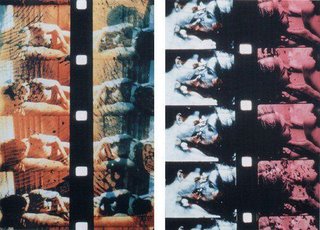 13. Fuses - dir. Carolee Schneemann - 1967ish - USA
Fuses really helped me in my understanding of the difference between art and pornography. I knew the definitions of both, but Fuses really drove it home -- and it wasn't merely because Schneemann painted over the frames of film footage of her and her boyfriend having sex on the beach. Instead, Fuses was a film about feeling... that just so happened to have unsimulated sex. 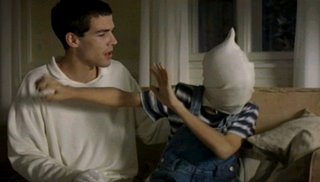 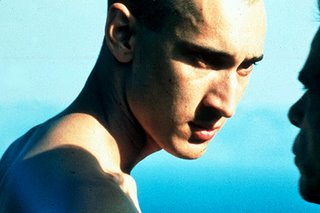 15. Beau travail - dir. Claire Denis - 1999 - France
Though written poetry has never been an interest of mine, visual poetry on the other hand... Narratively speaking, Beau travail is nil. Yet it's still the finest achievement from a filmmaker who often just misses her mark. 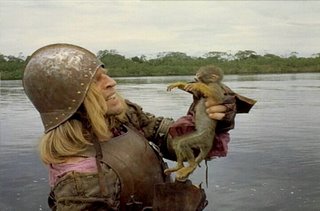 16. Aguirre, the Wrath of God (Aguirre, der Zorn Gottes) - dir. Werner Herzog - 1972 - West Germany
After taking a class on Herzog, I feel no greater connection to his cinematic world, yet Aguirre will always deeply affect me. Like Betty Blue, Aguirre's (Klaus Kinski) passion turns to utter insanity, and like Dalle's life strangely mirrored that of Betty's, Kinski's own insanity makes for the most compelling of cinema. 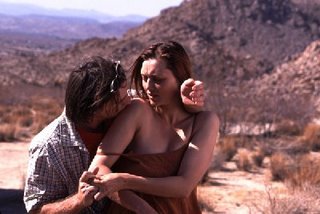 17. Twentynine Palms - dir. Bruno Dumont - 2003 - France/USA
One of the highlights of the French Extremism wave of the early 2000s (it seems to have died down a bit), seeing this film in a nearly-empty theatre in Paris was probably one of the most uncomfortable cinema experiences I'd ever had. It didn't help that the other patrons stared at the screen, zombie-like, completely unaffected by what was taking place onscreen. But you know the French... 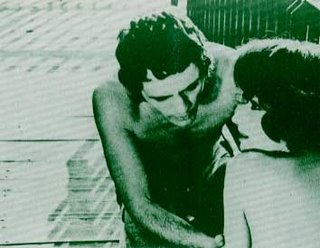 18. Teorema - dir. Pier Paolo Pasolini - 1968 - Italy
Easily my favorite Pasolini film, but to this day, I cannot really explain why. 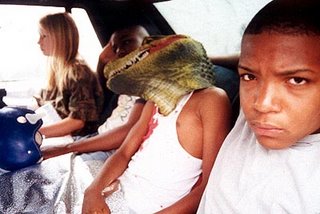 19. George Washington - dir. David Gordon Green - 2000 - USA
Here's a staple of the "I'm a thoughtful young film student" canon that I don't mind buying into (or, better yet, admitting to buying into). Gordon Green's debut film is beautiful and small. Unfortunately, when he tried to give us a backbone narrative in his later films, we lost interest. He works best in moments, and, since George Washington is a series of them, it works magnificently. 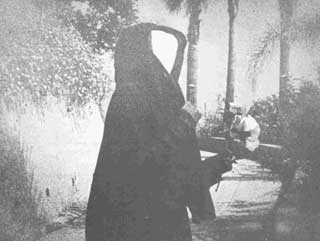 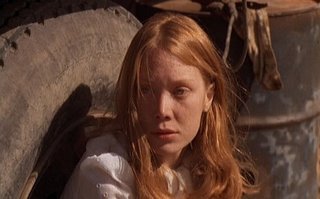 21. Badlands - dir. Terence Malick - 1973 - USA
I'm hardly in the mood to get into why Badlands is the smart-person remake of Bonnie & Clyde. 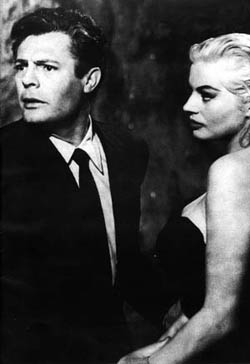 22. La dolce vita - dir. Federico Fellini - 1960 - Italy
Federico Fellini was to be my rejection of the canon which I, obviously, have accepted. 8½ didn't do it for me. Neither did Juliet of the Spirits. But who was I to reject the astonishment and despair of La dolce vita? In fact, I was rather disappointed how much I loved it. And it wasn't just because I loved Nico at the time or could stare at Anita Ekberg in that fountain for days. I have accepted my role as film student robot.

23. Partner - dir. Bernardo Bertolucci - 1968 - Italy
I fucking hate Bernardo Bertolucci. And, worse, I hate that I really dig a bunch of his films. Partner was like a beat novel interpreted by the Nouvelle Vague, with a central figure one can only appreciate within this context. Partner is also an astounding, bittersweet reminder of when filmmakers thought cinema really meant something... 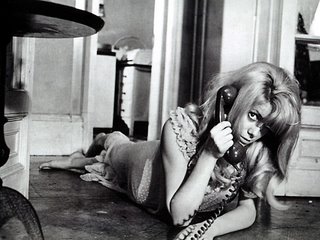 24. Repulsion - dir. Roman Polanski - 1965 - UK
Catherine Deneuve, you must admit, really got away with a lot à cause de sa beauté. But that's a bit discrediting to her. Repulsion wouldn't have worked without her. And unlike her counter French icon, Brigitte Bardot, she consistently worked with challenging filmmakers. Repulsion also really explained to me the importance of audio in horror films; watching the film without sound and listening to it without visuals are alternately terrifying experiences. 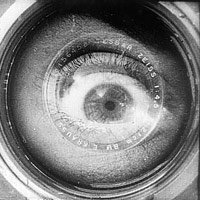 25. The Man with the Movie Camera - dir. Dziga Vertov - 1929 - Sovient Union
Absolutely fucking brilliant. If your film teacher doesn't show this in a history of film class, slap them and tell 'em to shove the Odessa Steps up their ass.
Posted by reassurance at 9:27 AM