When too much is just enough 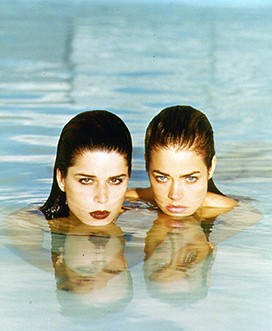 Inspired by a comment that my friend Brad made to me last night about a possible reteaming of Denise Richards and Neve Campbell, both in dire need of a return to the screen, in a film written by Stephen Peters, who wrote Wild Things, I've remembered the extreme fondness I had for the film when I was a wee lad. Wild Things is, above all else, a glorious parade of excess and trashiness. On nearly every level, we're given way too much, which strangely works in the film's favor. It never ceases to inspire a "no, they aren't going to... oh wait, they did" reaction. I could make a list that would go on for pages about everything that is taken to the fullest extreme here. The only thing missing was Denise Richards giving an unsimulated blow job to Matt Dillon. When a lesbian scene between two hot high school girls quickly turns into a bitchy cat-fight, when you get a full view of Kevin Bacon's obviously fluffed penis as he turns around in the shower, when you cast fucking Theresa Russell as Richards' gluttonous, slutty mother -- you know you're in for a treat. 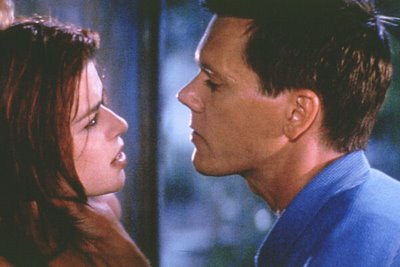 The tentative title for the Richards/Campbell reteaming is Backstabbers, which might as well have been the subtitle for this film. The plot twists and turns appear to be typically Hollywood, but when they come in the droves they do in this film, you can't help but smirk. It's certainly problematic when a film is aware of its own campiness, but Wild Things is so genuinely appealing in its seediness that this doesn't hurt it at all. Richards is perfect in her token role, the rich, pouty-lipped bitch (I really can't think of anyone who pulls it off better than she does). Campbell is delightfully miscast as the girl from the wrong side of the tracks, but still pulls off the alluring cruelty. Bacon is a total sleaze, a pulpier version of his character in Where the Truth Lies. And Dillon plays exactly the person you'd expect that he would have become if his career tanked post-1980s. The only one truly out of place here is Bill Murray, as the lawyer, whose role solely requires him to make unfitting jokes and shoot looks of utter confusion and moritification at Richards. His faces are the exact ones we'd give her if we weren't in on the joke. And because he's not, he's useless here. It's actually most surprising that the film was directed by John McNaughton, whose Henry: Portrait of a Serial Killer was a starkly realist horror film. He made a campy women-in-prison film a few years prior with Anne Heche and Ione Skye (weirdly predicting both of their "coming outs" as lesbians) called Girls in Prison -- though I haven't seen it, I doubt it matches the tawdry brilliance that is Wild Things. The film goes so far over-the-top you can't help but be shocked at the fact that McNaughton decided to cut a scene of Dillon and Bacon naked in the shower together. Now, that's too much.
Posted by reassurance at 7:23 AM