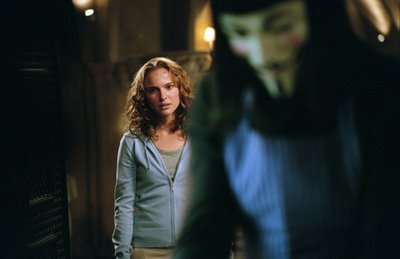 There’s the occasional film that comes out that allows me to forget my misanthropic ways and sucks me in with its seemingly-appropriate liberalism. Punishment Park, though truly a fine film, was another example of this. V for Vendetta is the latest, a big budgeted science-fiction action film written by the Wachowski brothers and based on a popular graphic novel by Alan Moore. I don’t know if the year is ever truly revealed by one can imagine its not far into the future. Unlike the sometimes bloated depictions of the near future in cinema (Blade Runner and Strange Days come to mind), this is a world we can buy. There’s nothing extra fancy about it, other than the face everyone has their own flat-screen television and talk on more impressive-looking phones. The world is characterized by a nighttime curfew where corrupt police officers roam the streets, and the chancellor of England (John Hurt) is hidden underground and only appears through video screens. England has become a totalitarian society, and we’re to believe that, after a serious war, the United States has lost its world power. None of this seems terribly out of the ordinary, as it never appears to be a far-fetched depiction of our future. The film begins on the 5th of November, where a masked political terrorist named V (Hugo Weaving) destroys a London landmark and aids a young woman (Natalie Portman), who becomes his captive and eventual ally. 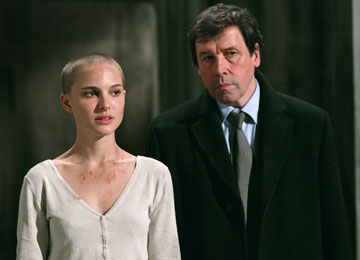 I always want to bite my tongue when a film comes along that goes against my beliefs of cinema, yet works satisfyingly to my dismay. The film’s attack is so above ground that the allegories in the film stop being allegories altogether. The film’s surprisingly pro-gay message is right there on the screen, not thinly-veiled as it were in X2 or any of Brian Singer’s other superhero films. Political corruption and its ties to the media aren’t merely suggested, they’re explicit. And the only thing that’s truly subversive about the film is that it was backed and released by a Hollywood studio. Yet, V for Vendetta is a necessary call-to-arms. It’s a film with revolutionary ideas, albeit ideas that are never hidden beneath the surface. Oh, and did I mention it’s entertaining as fuck?
Posted by reassurance at 2:36 AM

I’ve been browsing on-line much more than three hours as of late, nevertheless I don’t ever discovered any appealing posting like your site. It’s fairly worth adequate for me. In my opinion, if most of web site owners and folks produced great content material material as you do, the web will probably be a lot way more useful than ever before.
sinus infection home remedy