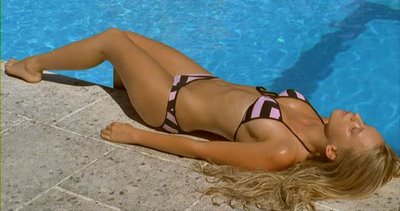 In preparation for Ozon’s latest, Le Temps qui reste, I revisited Swimming Pool and recalled what my friend Brad said about the film: “it’s too clever for it’s own good.” This is certainly the case and even more so when watching the film for a second time, knowing the “surprise twist” that baffled viewers that stumbled upon Swimming Pool expecting a saucy French thriller. In knowing the twist (which I will not give away), one can see the clues Ozon laid out throughout the rest of the film, rather meticulously. Ozon’s craft is not in question here; never did I think previously that the twist was a cop-out ending. However, in looking back, it is certainly possible for someone to be too clever, a surprising thing when you realize how shockingly unclever most Hollywood films are these days. Somehow, Swimming Pool never rises above its cleverness, and, on the surface, its tarty-French-vixen-inspires-the-sexual-awakening-of-a-crusty-old-Brit storyline fails to entice. 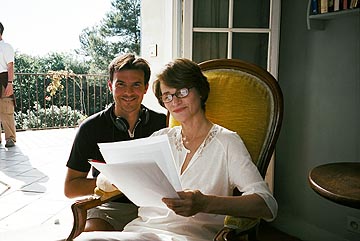 On the other hand, Swimming Pool is rather refreshing solely for Charlotte Rampling. In her second film with Ozon (the previous being the sublime Sous le sable), she seems to have found a welcome place in French cinema, one of the few countries where established, over-forty actresses can flourish (see Isabelle Huppert and Catherine Deneuve). Unlike Sous le sable, Ozon strips away her beauty, turning her into just the school marm, sexually-repressed English bitch you’d have imagined the character to be, making us forget that in her 50s, Rampling is still really sexy. But this is to her credit, naturally, as it elevates her above simply being the hot older woman you remember from The Night Porter. Also to his credit, Ozon immerses Swimming Pool with a steaming sexuality, with Ludivine Sagnier (whom he’d worked with twice before) as the voyeuristic object of desire. Swimming Pool may be admittedly clever to the point of distraction and noticeably without the certain moxie that so characterized his earlier films, but as a well-conceived diversion, it works.
Posted by reassurance at 6:25 AM