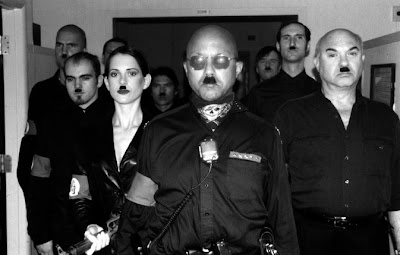 In an effort to keep The Decade List from becoming too high brow, I present Citizen Toxie, the fourth installment of Troma's most popular film (it hilariously apologizes for parts 2 and 3) and the second of three recent Troma films (Terror Firmer and Poultrygeist being the others) to exceed its company's legacy of micro-budget gross-outs. Citizen Toxie is crass, obnoxious and, surprisingly, quite funny. A shabby mix of Citizen Kane, The Wizard of Oz and the Bizarro episode of Seinfeld, the film places Toxie, the first superhero ever from New Jersey, in a mix of interdimensional travel after failing to save the school of retarded children from a group of diaper-wearing terrorists. He's planted into Amortville, no relation to, but probably a close suburb of, Morteville from John Waters' Desperate Living, the lawless counter of his beloved Tromaville, NJ. I tried to find Citizen Toxie's most inspired moment, a send-up of Citizen Kane's newsreel sequence, on the Internet with no avail. Citizen Toxie is the best sort of tasteless; its reflexive grotesqueness puts to shame its low-minded Hollywood counterparts, not to mention the slew of putrid imitators (hi, Gutterballs). 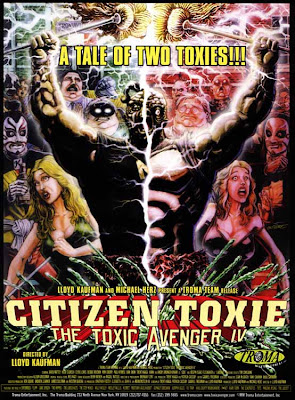 I knew you'd appreciate that I included this.