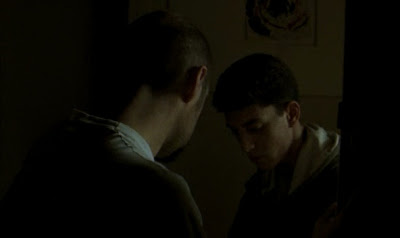 If there's a single filmmaker in the past ten years who I think has been criminally overlooked within the film community, it would have to be Sébastien Lifshitz. It's not so much a lack of appreciation, as the one or two people I know who've seen his films feel the same as I do, but being the closest offshoot of Claire Denis doesn't really get the film houses packed. (On a side note, I mentioned in my review of Lifshitz's Wild Side that his film's have more in common with mid-period Bergman, but the Denis comparisons, even beyond sharing the amazing cinematographer Agnès Godard, are apparent.) I finally got a chance to see the short he made prior to Presque rien, Les corps ouverts, which won both the Prix Jean Vigo and the Kodak Short Film Award at Cannes in 1998. Les corps ouverts, which appears on the French Film Office disc for Presque rien but irritatingly not on the US disc from Picture This!, basically lays out the groundwork for Lifshitz's later work, which I suppose is exactly what I hope for when a filmmaker follows the path of establishing theirself with a short to "graduate" to feature-filmmaking. To refer to Les corps ouverts as a "test-run" would be unfair, as it's quite good on its own. However, watching it retroactively, the thought lingered. Though I can remember when non-linear storytelling seemed to be a hot trend, Lifshitz, like Atom Egoyan, understood that the structure could only be truly rewarding if it were dramatically revelatory instead of divisively concealing. 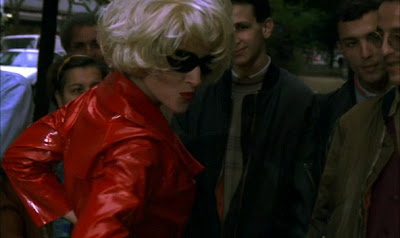 In many ways, the film's protagonist Rémi (Yasmine Belmadi) is Mathieu (Jérémie Elkaïm) of Presque rien and Stéphanie (Stéphanie Michelini) of Wild Side at the same time. Like both, he's thrust into the role of caretaker when his parent falls ill, and similar to his other films, his other parent is absent. Like Mathieu, it's a figurative orphaning as he's left to his own devices during the formation of his own maturity; like Stéphanie (and perhaps Mathieu after-the-fact), this "orphaning" results in an outward hardness (though this isn't exactly the case for Stéphanie) which is deceptive to both the characters around him and, most of all, to himself. The outward hardness, of course, could be reduced to Rémi's floundering attempts at a certain Arab machismo, which is seen early on during a casting session when he tells the director his favorite film is De Palma's Scarface, the beacon of feigned, hard-edged masculinity. His sexuality thus becomes less of an issue as his own applied gender norm, as he assumes the active role of "man of the house" with his ailing father (Mohamed Damraoui) and his sexually maturing sister (Dora Dhouib). This spreads to his sexual affairs, with both film director Marc (Pierre-Loup Rajot) and the street dancer (Margot Abascal), who looks like a Madonna impersonator circa 1988, where his projections conceal what his face is never able to hide. With Marc, Rémi rejects tenderness as if it were something to be ashamed of; with the girl, he recites his own poetry in an attempt to woo her with sensitivity. And then there's the porno theatre hook-up (with a character played by Lifshitz) where all of his naiveté and both sexual and emotional immaturity subconsciously reveal themselves. 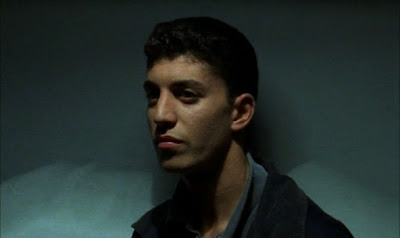 To go back to the Bergman reference, Les corps ouverts is no different from Lifshitz's later films. There's a jarring moment of truth in the film's closing shot, where the film returns to Rémi's casting session with Marc. Leaving the camera on Rémi's face as Marc explains the film to him, we learn everything we need to know about the film's protagonist in his face as if the camera captured something intangible within him. The weight of this shot is immeasurable and ultimately devastating. I can't recommend Lifshitz's films with any more enthusiasm that I've already displayed. With no word of future projects listed online for the director, I can only hope Wild Side wasn't the last we've heard from such a gifted filmmaker. 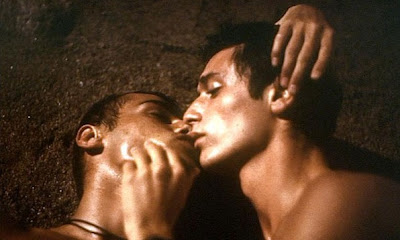 Comin' Home [My review of Wild Side from 21 June 2006]
Neverland et la folie de la jeunesse [A comparison piece between Presque rien and Pawel Pawlikowski's My Summer of Love from 14 April 2006]
Posted by reassurance at 4:14 AM

The recurring theme of one sick parent is very intriguing. They always linger through the main characters lives while they engage in complicated relationships that they struggle with. Lifshitz is one of the very few directors whose films revolve around gay relationships that I respect and love. I'm so glad you got the chance to see his Les Coups Ouverts!!

I'd only heard of Lifshitz because of Antony's appearance at the beginning of Wild Side. After I saw his segment on youtube, I stopped seeking out the film. Denis and Bergman similarities, though, do make him appetizing again.

I haven't seen any of these films but luckily Wild Side on on Netflix instant watch if anyone is interested.
I look forward to it tonight as my evening entertainment.

Thanks for the tip, Alex. And Blake, Wild Side is tremendous, for much more than just Antony's appearance at the beginning. Which is wonderful still....