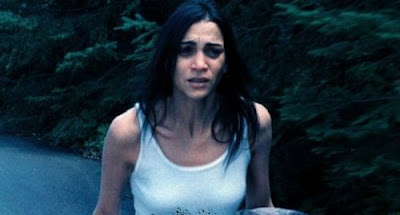 I'm not so sure it's my place to say anything about Martyrs as its partly-fabricated reputation certainly proceeds it. In the era of what appears to be Hollywood's shittiest onslaught of the horror genre, though I'm not sure when outside of the time around Rosemary's Baby, The Exorcist and The Omen when Hollywood wasn't churning out lowest-common-denominator horror trash, the French have taken the place of Hong Kong and Japan as the salvation for the true horror fanatic (of which, I wouldn't count myself). With their endearing love/hate relationship with Hollywood, the French approached Hollywood horror not in an attempt to reinvent it as much as revitalize it. From deformed inbred horror (Calvaire) to slasher flicks (Haute tension) and a pair of home invasion-ers (À l'intérieur, Ils), the filmmakers borrowed the familiar molds and, for a brief moment, made horror films relevant again. In an ill attempt to play "catch up," Hollywood abandoned their fleeting obsession with remaking every successful Asian horror flick and began enlisting the French to... remake their own national canon of horror. (Apparently, they aren't officially done with Asia though as this year's The Uninvited was a remake of A Tale of Two Sisters.) Despite the lousiness of Hollywood's first attempt with Alexandre Aja (Haute tension) and The Hills Have Eyes, Martyrs director Laugier is slated for the Hellraiser remake. This could certainly fall through as Julien Maury and Alexandre Bustillo (À l'intérieur) dropped out of the sequel to the remake of Halloween, which seems to be back in Rob Zombie's hands (and which I believe is not a direct remake of the sequel to the original). It might also be noted that H'wood has remade Ils into The Strangers and Aja's last film Mirrors was a loose remake of a Korean film. 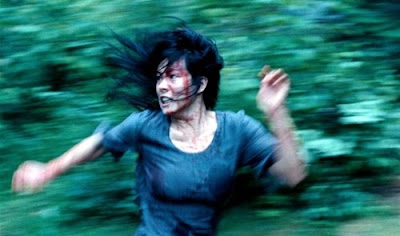 I might have wanted to speak more of Martyrs if it weren't riding so high on the waves of horror fantastics' new fascination with French horror. I had plenty to say about Maury and Bustillo's À l'intérieur [Inside] last year, but the stakes appear to be higher now as a result. Like Inside (and, other than placing women in the only active roles, this is the only real similarity between the two), Martyrs is going through the same befuddled release structure from The Weinstein Company. Building word-of-mouth from various film festivals (Toronto, especially) and the few people that saw it there, Martyrs was acquired by the Weinsteins, who are still clueless how to release a graphically violent, subtitled horror film to the American public. The DVD, which is still tentatively set for 28 April, has been delayed twice already (though this may have to do with financial woes), which may be the gravest mistake they could have made. With the French DVD released just yesterday, I'm sure it's only a matter of time before file-sharing networks allow the people who've been eagerly anticipating the film (and there are plenty) to see it before the Weinsteins can take their first check to the bank. I suppose the economic times are too shaky for studios to start experimenting with release structure (especially for The Weinstein Company whose successful Oscar-baiting of The Reader didn't exactly translate to box office gold and whose release slate for 2009 looks pretty depressing). However, if the trend of hotly anticipated European horror films continues, Hollywood is going to need to find a way to tap that market before they lose out to the many of us that have region-free DVD players. 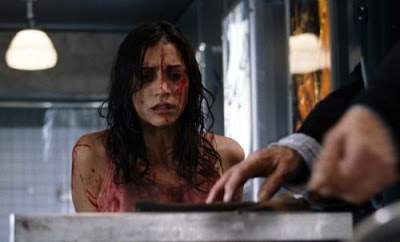 To address the film at hand, I don't wish to perpetrate the outlandish myths that have circulated the Internet, nor do I wish to dispel them. Martyrs plays so much to your expectations, whether they be low after catching all the shit Hollywood's been making or high as a result of fanboy gloating, that it's a disservice to the audience going into specific detail. It's ultimately bound to evade those expectations and that in itself is exciting. I don't mean to be irritatingly cryptic, but if you really crave to know more, there are plenty of other outlets to satiate your curiosity. As hopes of catching Martyrs on the big screen, where it belongs, are nil, it's probably well-suited for the film to simply bask in its transient mystery.
Posted by reassurance at 8:09 AM