Though I've always argued the case against describing Catherine Breillat as a "provocateuse," I'd be fooling myself to do the same with Lars von Trier. For the past eight or so years, I've grappled with the notion of Dancer in the Dark as an elaborate snuff film or the blackest comedy you've ever seen. It's as emotionally and narratively manipulative as a film can get, with very little remorse in being so. Never before had I seen a film with so much disdain for its audience, and I couldn't help but feel shat upon, seeing all the people around me bursting into tears and feeling as if my stomach had been ripped into shreds. Seeing and feeling such things was, frankly, embarrassing, and for that, I despised Von Trier. Tremendously.

This hatred would subside four years later, though perhaps out of some fear of rekindling those feelings of embarrassment, it wouldn't be until last night that I would return to Dancer in the Dark. From its first moments following the overture, as Selma Ježková (Björk) rehearses for her role as Maria in a production of The Sound of Music, the entire film came swirling back to me, without the varying layers of defense and condemnation I'd been placing upon it for years. Dancer in the Dark became something entirely different in my head, but during those first moments, it was clear that I'd never really forgotten Dancer in the Dark, the film, the same way most people have never really forgotten The Sound of Music.

With numerous reports of spats on the set of the film, one can't help but wonder if von Trier was consciously turning Dancer in the Dark into his own personal Passion of Joan of Arc; he's been quoted as being a huge admirer of co-patriot Carl Theodor Dreyer. In Dancer in the Dark, Selma is von Trier's own Joan of Arc, and Björk, who swore off acting after making the film, is his Maria Falconetti, cinematically immortalized (Björk would later star in husband Matthew Barney's Drawing Restraint 9, though her appearance wouldn't be considered "acting" by any traditional definition). Björk's performance is truly marvelous. It's a thing of uncomfortable privacy, so excruciatingly vulnerable you're almost ashamed to be watching it. The experience of watching her becomes visually exemplified during the scene where Bill (David Morse) exploits Selma's blindness by pretending to leave her trailer and discovering the hiding spot for her money. The overwhelming guilt that arises in Bill, after stealing the money, can be felt within the spectator as it becomes less clear whether it's really Selma's tears, and not Björk's, streaming down her face.

Whether you prefer the term meta-musical or anti-musical, von Trier's approach to the musical is where his brutality can be best defended. "I used to dream I was in a musical, because in a musical, nothing dreadful ever happens," Selma tells the sympathetic prison guard (Siobhan Fallon); though it's never actually mentioned, one would have to imagine Selma named her son (Vladica Kostic) after Gene Kelly. Her love of musicals provides the imagined, visualized escape from Selma's harsh reality as von Trier constructs Dancer in the Dark as a musical negatively exposed, in which everything dreadful happens. The emotional and narrative manipulation he creates becomes less an act of a sadism than of faithfulness in invoking what would have to be the inverse of escapism.

Though he never grants his audience it, von Trier utilizes the idea of the musical as the highest form of cinematic escapism almost as a condolence to Selma/Björk. For Björk, the musical numbers, which don't begin until nearly forty minutes into the film, place her in the familiar, the home from which she came. Whether singing to Cathy (Catherine Deneuve), or Cvalda as Selma calls her, in the factory or dancing next to a moving train with Jeff (Peter Stormare), von Trier allows Björk to return to her element, away from the taxation and foreignness of acting. For Selma, the visual manifestation of her Busby Berkeley dreams yields the sympathetic relief she's never given in her own "reality." The dreams transform machinery into a symphony, the assembly line into a chorus line and turn poverty into beauty. By allowing there to always be someone to catch Selma when she falls during her dreams, von Trier bestows the compassion so many people claim he lacks onto Selma. Within these musical dreams, which transpire the same way the film's "reality" does, Selma/Björk can physically and metaphorically leave the film after singing the next-to-last song, the same point Selma would make her exit when seeing a musical in the theatre. The "film" is therefore allowed to "go on forever" for Selma, and for Björk, she can then be replaced by lifelike set piece that hangs from the noose as the camera goes "out of the roof" to Dancer in the Dark's end.

The suggestion that Dancer in the Dark exposes some compassion beneath von Trier's misanthropy (which, also, if often confused with misogyny) can be largely attributed to Björk. Dancer in the Dark is such a divisive film that the arguments I make for von Trier's compassion could be easily argued as being just the opposite, a simple, and very cruel, irony. However, Björk's performance is so transcendent that it allows that illusion to endure. Then again, maybe the strength of her performance serves as the punch line of a malevolent joke. But, I suppose, what is cinema if not the greatest durable illusion? 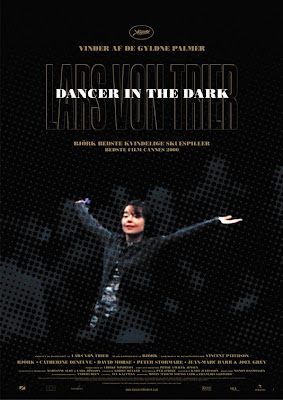 "The dreams transform machinery into a symphony, the assembly line into a chorus line and turn poverty into beauty."
+
"What is cinema if not the greatest durable illusion?"

Thanks Nathan. I wasn't so sure about that last line, just as I'm still not sure about the film as a whole. Though I'm defending it here, I certainly have my doubts. But honestly, it kinda tore me apart watching it again last night. Like Gaspar Noé, I'm never really sure about von Trier's intentions (at least here, and in Breaking the Waves); I'm only certain that both men know how to make a fuckin' movie.