Few directors hit their mark on their first outing, and, as David Gordon Green has shown us, few sustain the momentum of such heights (Lynne Ramsay might be the exception, but she only has two features under her belt at the moment). George Washington is spellbinding. With its Terence Malik-inspired rural beauty (cinematographer Tim Orr would shoot all of Green's subsequent features), Green crafts such unexpected tenderness and horror, a combination that usually goes about as well as oil and water. It's hard to say Green hasn't lived up to the promise of George Washington, as so many of my Zooey Deschanel-obsessed mates would list All the Real Girls among one of the best films they've ever seen. Like Ramsay's Ratcatcher, which was releasing theatrically in the US during 2000 and by no small coincidence was also released on DVD by Criterion, George Washington captured adolescence without the taste of nostalgia and romanticism so many filmmakers can't get away from. However, for me, Green, especially after the curious, though nowhere near terrible, teaming with the Judd Apatow crew last year, Green's output will probably never exceed his first feature, a glowing, poetic dream of a film. 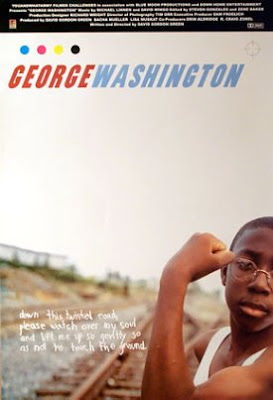