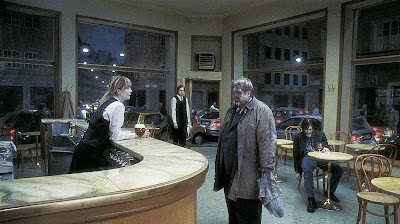 Described by many as set in the near future, that's a claim I'm not sure is supported by the film itself. One of the characters takes up business in selling crucifixes, exploiting the Christian population's strife to cling to religion, stating it's hard to beat a two-thousand year anniversary. Now this could refer to the anniversary of Jesus' crucifixion, but I somehow doubt it. And yet, it doesn't particularly matter when Roy Andersson's brilliant Songs from the Second Floor is set, because during our current economic crisis, the film holds even more weight and significance than when it was released nine years ago. Set somewhere in Sweden, the grief of a dying economy spreads among the city; it even calls to mind a recent Saturday Night Live segment in which Björk, played by Kristen Wiig, discusses the economic hardships in Iceland, with the country's bail-out consisting of the prime minister tying all the country's wealth to a horse and running it into the sea. Songs from the Second Floor was Andersson's third feature, his first in twenty-five years. 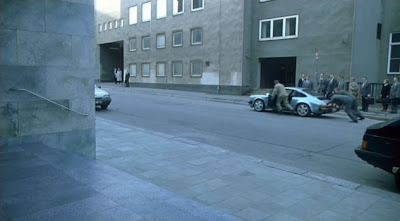 In Songs from the Second Floor, Andersson crafts single-take, deep-focus shots of boiling frenzy with its lid on, absurdist comedy at its finest. No explanation is really given to the recession, but it affects the entire town in Altmanesque fashion, with the film's central character Kalle (Lars Nordh) resorting to burning down his own furniture store for insurance money. The recession has turned into a plague of sorts, taking, not least of which, rationale with it. Kalle takes the subway and meets his youngest son Stefan (Stefan Larsson) at a bar covered in soot after his bit of arson and even screams like a craz(ier) person at his institutionalized son Tomas (Peter Roth), who "wrote poetry and drove himself nuts." In these hard times, there's feeble attempts at "upholding history and tradition," which meets its greatest failure when it sacrifices a young girl for the country's strength. 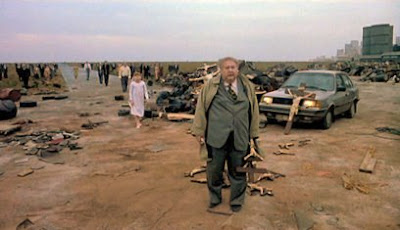 Though a statement like this can be made about most films, writing about Songs from the Second Floor does little justice. Songs from the Second Floor is howlingly funny, in ways I think only matched by Federico Fellini (especially that fashion show in Roma). Thankfully, the film wasn't followed by another artistic disappearance from Andersson, who followed the film up seven years later with You, the Living, a similarly-styled "poem" of lost souls in his native country. It's the second part of a planned trilogy, one which has a helluva lot to live up to. 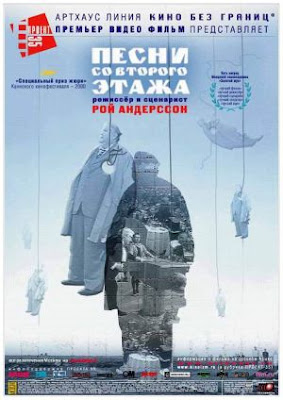