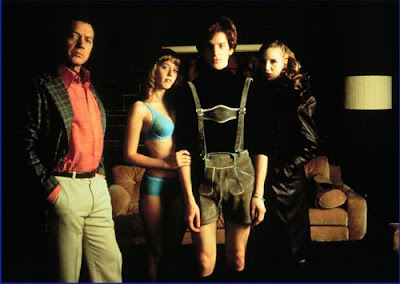 Water Drops on Burning Rocks was the first of François Ozon's bountiful offerings in 2000, the year in which he presented the two best films of his career (I have yet to see Ricky, however). Adapting the film from an unpublished play written by a nineteen-year-old Rainer Werner Fassbinder, Ozon mapped out his own career, in both his finer and weaker points. Unlike fellow second generation Douglas Sirk admirers like Todd Haynes or Pedro Almodóvar, Ozon's fascination with the melodrama could be attributed best to Fassbinder. While Haynes took a more direct approach, Ozon drew inspiration through the filtration of Sirk's legacy in Fassbinder, acknowledging his own (intended) similarities to the director with Water Drops on Burning Rocks and later Sous le sable, Le temps qui reste and Angel. The film, then, would showcase the talents of both artists before Ozon ventured on his own later in the year. 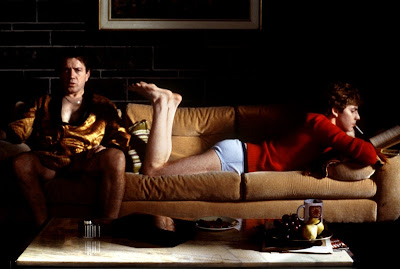 For Fassbinder, the play wonderfully embodies the sinister humor of his notable early works, like Katzelmacher and Why Does Herr R. Run Amok?, but it's The Bitter Tears of Petra von Kant where the most similarities can be found. With all the action confined within the walls of a single apartment, the single set piece transforms into the carefully adorned fighting ring for the four characters. It could be suggested that the claustrophobic restriction of the set would be the catalyst for the uncoiling misery in Franz's (Malik Zidi) life in the same way Catherine Deneuve's apartment in Repulsion would trigger her own demons. However, the apartment better represents the incubation chamber of Franz's despair, being left alone for weeks while his older lover Léopold (Bernard Giraudeau) travels on business. The key to Franz's unhappiness, like Petra von Kant's, lies within him as he becomes unable to extinguish the fact that he's fallen in love with someone who (likely) doesn't love him; the walls just amplify the anguish. Also like Petra (Margit Carstensen), he finds the outlet for its release in other people, spitting malice in the face of his former fiancée Anna (Ludivine Sagnier) just as Petra would to her secretary Marelene (Irm Hermann). Anna, though, is hardly the innocent witness to Franz's transformation. Between the two films (Petra von Kant was released nine years after Fassbinder would have written Water Drops), the most noticeable difference can be seen in the reversal of roles between the two central pairs of lovers, pegging the older Léopold as the predator in contrast to the younger Karin (Hanna Schygulla), whose involvement with Petra suggests self-advancing manipulation. 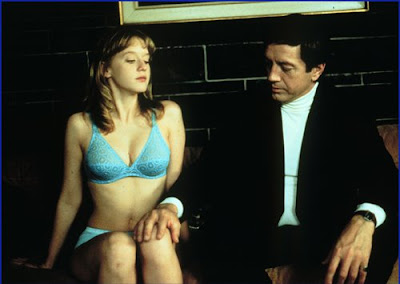 For Ozon, traces of Water Drops on Burning Rocks can be found in almost all of his subsequent works. Divided into four acts, the film moves from the playfully sexy to the dreadfully bleak, though the path isn't as straightforward as one might assume. Water Drops on Burning Rocks doesn't descend into the austere with each passing act; in fact, it retains its borderline misanthropic humor even after things get hopeless for Franz and Véra (Anna Thomson), Léopold's former lover who had a sex change in order to rekindle the spark in their dying relationship. The moment where Léopold phones Franz's mother at the end of the film painfully recalls the final moments of Why Does Herr R. Run Amok?; this coldness is shared by both of Franz's lovers, with Anna's line "Who's going to father my children now?" placing her on the same careless plane as Léopold. 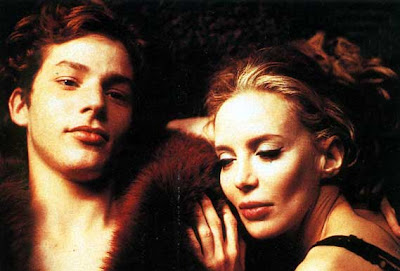 In terms of characterization, Véra becomes the film's most tragic figure. Officially entering the film in the fourth act after showing up earlier at Léopold's door twice, she is subjected to Léopold's cruelty within her first steps into the apartment. Despite these initial signs of hostility from Léopold (he purposefully refers to Véra as an old "copaine" in order to correct himself with the masculine form of the word to insult her), she plays along with his game of sexual manipulation until it becomes clear that she's only being used to hurt Franz and to seduce Anna. For Franz, Véra's return gives him a glimpse of his own doomed future; however, he succumbs to the hopelessness before Véra even reveals her own inability to stop loving Léopold. Véra emerges as the tragic figure when the film lets her humanity surface. Unlike Franz, she didn't succumb to the unbearable mimicry that occurs in Franz during the third act. She retains the sad hope Franz holds in the second act, when his awareness of Léopold's nature is still balanced by attempts to reconcile his lover's terminal dissatisfaction. Thomson, who enjoyed a wave of popularity in France after the starring in Amos Kollek's Sue and Fiona, gives Véra the perfect amount of compassion and sorrow, which makes the film's final shot, in which the audience learns all they need to know about her future, ever so desolate. 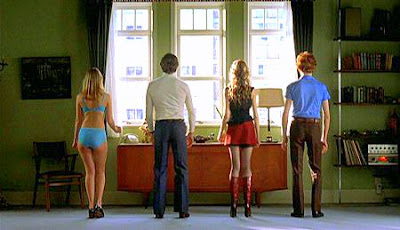 Looking back at Water Drops on Burning Rocks, you can almost see Ozon's entire career up to now inside of it. Between the amazing fourth-act dance number to Tony Holiday's "Tanze Samba mit Mir" (8 femmes), the crippling aspects of a relationship gone sour (5x2), the knowing touches of melodrama (Le temps qui reste), the pop music cues of Françoise Hardy's version of "Träume" (Une robe d'été) and a character's inability to accept the end of a relationship (Sous le sable), all of his films appear to have stemmed from this one film. Although his body of work may vary as much in quality as it does thematically, the same can't be said for Water Drops on Burning Rocks. 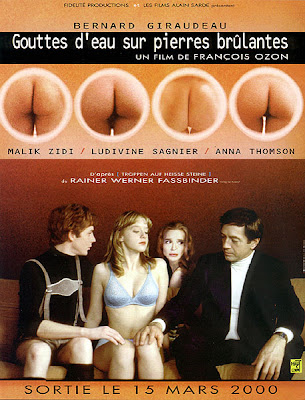 have i told you i love (your blog) lately?

Thanks Lane. I really appreciate it. I'm glad people seem to like that I've returned to more film-specific writing than just film news.

Melbourne Escortred lingerie Fast forward the years to about 5 decades and what have we got? The hair graying and thinning; teeth all but gone, only to be replaced by dentures; and sagging skin

cam sydney stripper here are some basic things that you can follow to get your teeth flossed, and safe from cavities

camscheap lingerie This process used to be very long and drawn out, forcing potential customers away from the best deals and even from the loan process in general.

Gotra matching is one of the most important concerns in Hindu matrimony. Escorts Sydneyeffects of salvia