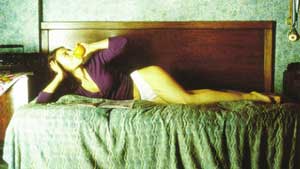 I've retitled "pick of the day" to "rant of the day," because I think by the end of the summer I'll probably have run out of good films to talk about. Plus, isn't it more fun to talk about bad ones? With lovely, loning cinematography and a fancy soundtrack by Piano Magic, Son de mar nicely disguises the fact that it blows. Bigas Luna likes sex (Las Edades de Lulú [ The Ages of Lulu ], Jamón, jamón, La Teta y la luna [ The Tit and the Moon ]), and he films it well -- but no one's ever really mistaken him for a good director. Though stars Leonor Watling and Jordi Mollà compliment the images, Son de mar is better suited as dressing for your morning pancakes. Skip the melodrama, listen to the soundtrack.
Posted by reassurance at 5:43 AM

The end of the "summer"? I am confused.

I say that because I'm sure I'll run out of good movies to talk about by that point. So, I've changed the format.