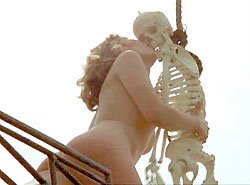 Feature-length avant-garde cinema can be problematic. I’ve always held to the notion that the nature of cinema can be best expressed either in a short period of time (Buñuel’s Un chien andalou) or with epic proportions (Warhol/Morrissey’s Chelsea Girls, Brakhage’s Dogstar Man). Though a lot of films that fall under the umbrella may prove my next statement false, something of an avant-garde nature really shouldn’t fall under anyone’s pre-conceived notions of what something should or should not be. This applies to a film’s running time as well. At 100 minutes, Fernando Arrabal’s J’irai comme un cheval fou feels like too much, and yet not enough, all at the same time.

Arrabal comes from the Buñuel school of surrealism. His film is rich with sexual and religious imagery. Both directors often thwart gender roles, notably the Annie Lennox-looking girl in Un chien andalou or the main character Aden Ray’s (George Shannon) liking toward women’s clothing. You will notice other similarities in Alejandro Jodorowsky’s first film, Fando & Lis (pictured below), as it is based on one of Arrabal’s plays. As Buñuel progressed in his career, the surrealism became more fluid into his feature films. None of them (that I’ve seen, at least) ever felt like a stretched out version of Un chien andalou or L’Age d’or; rather, he applied his fascination with the surreal smoothly into more narrative films like La Charme discret de la bourgeoisie or Belle de jour. J’irai comme un cheval fou is novelist and playwright Arrabal’s second outing as a filmmaker; his first Viva la muerte is somewhat of a cult classic. 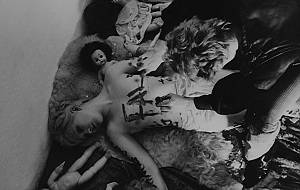 It appears Jodorowsky had a better handle on Arrabal’s material than even the writer himself. Whereas Fando & Lis is rather fascinatingly bizarre and consistently watchable, J’irai comme un cheval fou doesn’t work. Aden Ray is a snotty, bourgeois Frenchman who’s on the run after his mother (Emmanuelle Riva) is found dead. He retreats to the desert where he befriends Marvel (Hachemi Marzouk), an uncivilized man who doesn’t appear to have ever met anyone else, but remarkably speaks fluent French. Go with it, the film isn’t based anywhere near the real world. Aden becomes fascinated by his relationship with nature; animals obey Marvel, and he can make things fall from the sky. In fact, he’s rather Jesus-like, and from the onslaught of Christ imagery, it’s not an unlikely assessment. After spending time exploring his more primal nature, Aden invited Marvel back to the big city and offers him all the money he wants. What follows is something along the lines of a clumsy surrealist Encino Man. Naturally, Marvel doesn’t fit in… and Aden can’t seem to figure out why.

Unfortunately, the images here don’t compel as they should. We see people in gas-masks and white robes doing tribal dances and having sex, naked children being executed, sexual encounters with a woman who turns out to have a penis, women getting ejaculated on as they look ready to receive holy communion, among other things. Some of these images have appeared in other films. The gas-masked sex scene calls to mind a similar one in Derek Jarman’s The Last of England; the woman with the penis plays out like a more comedic Crying Game. And while Jarman and Neil Jordan may or may not have seen this film, the elements work better in their films than they do here. J’irai comme un cheval fou rings painfully obvious. Had the images been less obvious or more striking maybe the film would have worked. But maybe boring, easily-dissected surrealism fits for what’s essentially an uninteresting, simple fish-out-of-water comedy.
Posted by reassurance at 5:08 AM