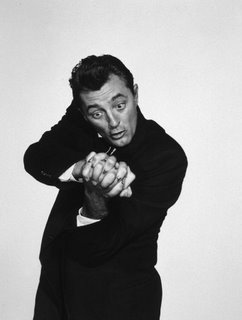 Like a fable from Hell, the incomparable Robert Mitchum, as a twisted preacher with the words "love" and "hate" tattooed on his fingers (pre-Do the Right Thing), leaves prison to con his way into the family of his cellmate, who has confessed to stashing a large sum of cash without revealing the location. Looking for companionship and help with her two children, Shelley Winters reluctantly allows Mitchum into the family, only to have her sexual advances rejected by the preacher ("a woman's body is for begettin' children, not for the lust of men!"). Winters meets her demise, and her two children run off into the woods. What follows is a sort of perverse Hansel and Gretel until the children find themselves into the arms of Lillian Gish, as the religious positive of Mitchum's negative. With expressionistic cinematography that almost makes The Cabinet of Dr. Caligari look subtle (I may be exaggerating a bit), famed British actor Laughton (Night of the Hunter marks his only directing credit) created a film so uniquely bizarre and horrifying that no genre nor description can do the film the justice that it so deserves.
Posted by reassurance at 2:37 PM

I have to agree ... a must see film. Mitchum is just fantastic, and very scary!

I think that this is really good, I want to share more information about it because sexual advances has a relationship with top pills