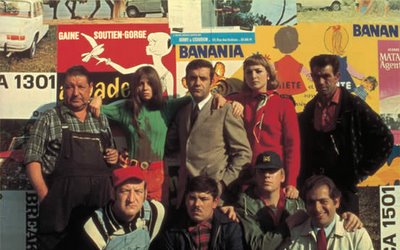 Approaching Weekend can be rather difficult, as it is like no other film I’ve ever seen. Rather… approaching Godard is rather strenuous. As the most notorious of the Nouvelle Vague gents, his films all seem remarkably different, even if you can spot his directorial stamp on each of them. What’s most striking about Godard is that his films, ranging from crime flicks (Le Petit soldat) to bizarre sci-fi noirs (Alphaville), none of his films appear to exist within the same cinematic world. One can notice the similarities between his first big success, À bout de souffle [ Breathless ], and one of his finer films, Pierrot le fou, as they both follow Bonnie & Clyde types in France (even the character of Pierrot is mentioned in Breathless), but it isn’t likely our pairs of lovers would run into one another onscreen (even if the iconic Jean-Paul Belmondo didn’t play both male leads). His style exists throughout his canon -- mostly through a series of interruptions in plot, whether it be text or characters addressing the camera. Breathless came before this. Weekend did not. 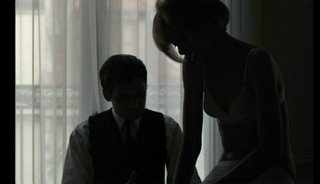 All this said, I don’t consider myself any sort of authority on Godard’s work. So much is missing in his DVD catalogue that I can only observe and comment from what I’ve already seen. And from what I’ve seen, Weekend stands as his most impressive feat (though I do hold Pierrot and Le Mépris highly). It’s a film about politics, about race, about class, about cannibalism, about Hell, but make no mistake: this is no Crash (I’ve decided to use every opportunity I can to trash that film so you will never be mistaken of my stance there). Corinne (Mireille Darc) and Roland (Jean Yanne) are married and enjoy tossing death threats at one another. They’re on their way to visit Corinne’s parents, to poison her father and steal his money. Though both are highly materialistic, they don’t appear to need the money for any particular reason, other than to just have it. They’re terribly bourgeois and thoroughly loathsome.

The film’s most famous scene, a nearly ten-minute-long single-camera shot of Corinne and Roland’s exit of the city through a massive traffic jam, occurs early in the film and would suggest their entrance into Hell had we not already felt like we were there. So what is Hell to Godard? In Weekend at least, Hell is a world destined to destroy itself in traffic, a world where poetry is dead, where materialism and misanthropy flourish. Basically, Hell is an exaggeration of Earth, sans conscience. Our antiheroes encounter a series of strange people episodically, including a snotty rich bitch (think Paris Hilton) whose gorgeous and rich boyfriend was just slain by a farmer in a tractor and even Emily Brontë whose fascination with the poetic world (and lack of assistance in the couple’s quest) leads Corinne and Roland to set her on fire.

Though at the height of his career, Godard began to slip shortly after Weekend, somewhere around the time of Tout va bien. Despite his contiuing fascination in the realm of politcs and cinema, is films became less important politically and cinematically as his message got lost in his own style. Seeing Tout va bien beforehand, I found myself bored near the midway point of Weekend. Godard loads Tout va bien with spoken political essays and theories directed at the camera; so much so that the viewer gets lost in the words. Near the end of Corinne and Roland’s journey, they hook up with a pair of garbage men who jump into similar speeches, about the state of imperialism and Africa. This scene is matched at the beginning with a sexual confession by Corrine. Telling who we presume to be her extramarital lover about a Bataille-esque sexual escapade (or is it a dream? Corinne can’t remember) between herself and another married couple. What’s lost in translation is the contrast between music and dialogue. For an English speaker, the scene is completely subtitled, and we receive every, naughty word that comes from her mouth. For a French viewer, this would be difficult, as the score often overpowers her confession. This is the beginning of Godard’s attack on his audience. Without the subtitles, the suppressing score infuriates the viewer, covering up key bits of salacious testimony. The dialogue is not similarly obstructed in the garbage men’s speeches; we can hear every word they say. Sure, you want to hear all about Corinne going down on another woman, but when it comes to the smothering effects of the United States and capitalism, you doze off. And I did. Godard shoves the knife in deepest when he cuts to Corrine and Roland on the garbage truck. The speech continues, but they sit motionless, staring into space, smoking cigarettes, simply as uninterested as you are. Godard does a more than worthy job of making you despise these two heathens, and now he’s comparing you to them! What an asshole. What a brilliant asshole move. Never before have I felt so wonderful being attacked.

Godard’s ambush on the class system and bourgeois assails violently. His attack on you, the passive audience member, arrives quietly and subtly. But it’s that's always blow that hurts the most.
Posted by reassurance at 6:37 AM

As you might have noticed in my blog, I went on a quest to see every Godard film up through his work in the 1980s. If you haven't seen his 80s gems you should see if you can rent Prenom: Carmen, Sauve qui peut (la vie) and yes, even King Lear, which is as amazing as it is controversial. But I'm sure you've gotten recomendations like these before.