Do It for Van Gogh 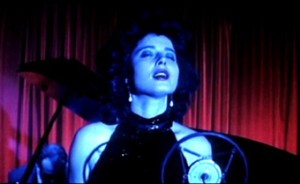 I think everyone has one. Everyone has that one film (or maybe its multiple ones) that make you laugh maniacally before the jokes even happen, force you to shout out the memorable lines, and allow you to forget there was ever a time when you hadn't seen that film. Blue Velvet is mine. I can throw out some of the worst Isabella Rossellini impersonations you've ever heard... I can retell Laura Dern's dream about the robins verbatim... and I usually end up yelling out Dennis Hopper's lines before he says 'em. This proved rather irritating to the other attendees of a Blue Velvet midnight screening in Chicago one summer. Whatever, fuck 'em! I'm sure they could annoy me just as much during Steal Magnolias. Today is David Lynch's birthday, and I wanted to write about my personal favorite of his work (Twin Peaks: Fire Walk With Me)... Somehow, summarizing my thoughts about that film proved futile. Maybe I'll get to a long essay about Fire Walk With Me another day. C'mon, Roger Ebert -- the receiving end of much of my friend B and my repulsion lately -- hated it... that's gotta say something.
Posted by reassurance at 6:58 PM

Really, do you have some sort of beef with Dolly Parton?

For me the movies with Will Ferrel are just so so funny, he is such a great comedian.