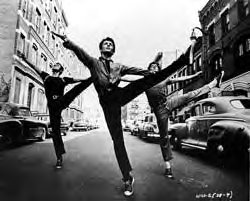 On the surface level, these two films look like tough, gritty motion pictures. Cool!, directed by Theo Van Gogh, a distant relative of Vincent who was murdered shortly after the release of this film, depicts the streets of the Netherlands as a crime-infested wasteland for racially diverse young men. Gaël Morel's Le clan (or Three Dancing Slaves as its known stateside) tells the story of three tough-love brothers in a small French town. While having little in common otherwise (except for the depiction of second-generation North African immigrants in Europe), both films take a decidedly peculiar approach to their tales of male youth. 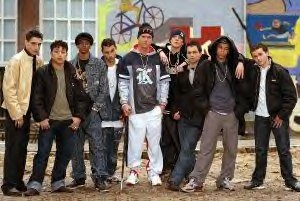 To any ol' viewer, Cool! might come off noticably less "cooler" (sorry, it was too easy) than its title may suggest. It's not terribly gritty, and the rap interludes look like some local Detroit hip-hoppers making a music video lamer than the song itself (though I did find out the word 'fuck' has made its away into Dutch slang). A group of mixed racial Dutch teenagers get sent to an experimental juvenile detention after a blundered bank robbery. The masterminds behind the robbery remain on the outside, lead by a pure-bred Dutch thug who eats fruits and vegetables like a reformed Ben Horne (Twin Peaks... if you didn't get it) while spatting out masturbatory stories about his accomplishes while watching lesbian porn; the older gang appears victorious, untouched by the cops and holding the prize, a sassy bartender who holds the hearts of both gang-leaders. But another bank robbery is bubbling beneath the surface... and with the young gang's impending time off for good behavior, you can bet some trouble's in store.

With all this, we get the occasional rap music video interruption of plot. What made me ill at first soon took shape in my mind as Van Gogh's reimagining of the musical. Instead of lavish choreography and production design, we get a bunch of Dutch rappers in oversize clothing shrugging their shoulders and shouting into the camera. In the past few years, cinema has brought us a new understanding (or maybe just appreciation) for the once-dead genre of the musical. There's the absurdist, tongue-in-cheek musicals (the South Park movie, 8 Femmes, The Happiness of the Katikuris), our traditional Broadway adaptations (Chicago, Phantom of the Opera, Rent), a rock 'n' roll entry (Hedwig and the Angry Inch), and of course Dancer in the Dark. Cool! is really none of the above, yet all in the same. It uses hip-hop music, which one wouldn't normally associate with the genre, yet it follows a perfect pattern for the genre. The songs don't push the plot forward, instead they offer a look inside the feelings and sentiments of the characters. The film leads us to the inevitable final bank robbery where the winner will be decided... and the girl will be nabbed. It's final sequence is laughably melodramatic, filled with slow-motion facial close-ups, characters jumping in front of bullets, the police arriving seconds to late.... and Van Gogh closes the film as if it were American Graffiti, letting us know (thankfully without awful text) what's become of the characters who never really emerged past their onscreen two-dimensions. Its closure really drives home that Cool! is not the gritty, tough film it disguises itself as. 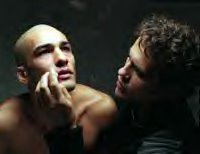 Le clan has all the makings of a tough-guy film as well (unfortunately not a tough guy musical). Co-written by the loathesome Christophe Honoré (a man partially responsible for three of the worst French films in recent history, Les filles ne savent pas nager [ Girls Can't Swim ], Novo, and Ma mère) and director Morel (star of Les Rouseaux sauvages [ Wild Reeds ]), is--guess what--not so. Instead, we have a shallow tale of ripped, shirtless men bonding. Unlike the similarly homoerotic, female-less world of Claire Denis' Beau travail, Morel is more concerned with the development of our three brothers. He fails miserably, since I can only recall minute details about the three and surely not their names. One's a hothead who fucks trannies and loves his dog; another wants to change his life for the better post-prison; the youngest is shy and has the hots for one of their male friends. Le clan, while trying to show the hardships of small-town life, only amounts to creating a fantasy world where women don't exist (the only woman in the film--even in the background of the film--appears within the last ten minutes) and male depth can be determined by the definition of their abs. The three brothers take their small town existence in separate directions (as the film is clearly divided into three chapters and seasons), but the film can never escape its own physical shallowness. Morel treaded on similar ground, though with a tad better success, in his prior À toute vitesse [ Full Speed ], a homoerotic fantasy of gritty French street life that at least features an earnest performance (from a woman, surprisingly... Élodie Bouchez).

You (as in the one person who I know reads this) can expect a re-listing of my best of 2005 sometime within a few months, as well as, in the more immediate future, a worst of '05...and, maybe, since I think the voting's officially closed on these topics, a 'best of' for a few years back.

Pick of the day: A film I shamefully forgot on my 2005 list (further proof of a need for a repost): Lukas Moodysson's A Hole in My Heart [ Ett Hål i mitt hjärta ], from Sweden, one of the more gruelling and claustrophobic films I've ever seen, not to mention a painful critique on the media, vulgarity, privacy, and (worst of all) ourselves. It's available in a Region 2 UK version here, but can also be found exclusively on Netflix Region 1.
Posted by reassurance at 4:25 AM

I read somewhere that the characters are positively indistinguishable because the script was so weak, no could be gleaned there. And even though the LAWEEKLY review tries to be positive, "grief and social constrictions on sexuality is most successful if viewed as a glossy video-log of a men’s trendy lifestyle photo shoot" does not sound so good to me.