She Can Hardly Wait 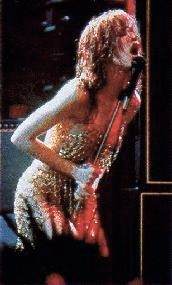 Before she was with the Licks, Juliette Lewis tossed her writhing body onstage in Bigelow's 1995 apocalyptic thriller, starring Ralph Fiennes as a loser who, while lusting over his ex Faith (Lewis), uncovers a police conspiracy at the coming of the end of the world. Really, this film isn't anything special... Ten years later, it's futuristic depiction of 1999 already seems dated (it was written by James Cameron). What's special is Lewis, rolling on stage covering "Rid of Me" with an intensity and sexuality that nearly matches her muse, PJ Harvey. Her lusty presence gives Strange Days' near two-and-half-hour running length a needed jolt. And even if she is a Scientologist and starred in abhorent The Other Sister, Juliette, we still love you.
Posted by reassurance at 10:47 PM

I saw Juliette Lewis on the Carson Daly show (I love you Carson!!!) and, blasphemy though it may be, she seemed like just another vacuous Hollywood skank making what I'm sure will be an abortive attempt at a shitty, derivative singing career. In her defense, though, that scene where she pisses in Natural Born Killers causes 19 to 32 erections per annum.

I don't think her singing career is actually about singing as much as it is about performance (big surprise, she's an actress). I think the appeal of seeing her onstage is to watch her do her best Iggy Pop impersonation while sweating all over the crowd. While Juliette and the Licks may be no Iggy and the Stooges, her PJ Harvey covers from 'Strange Days' are quite impressive.