In Defense of Gregg Araki 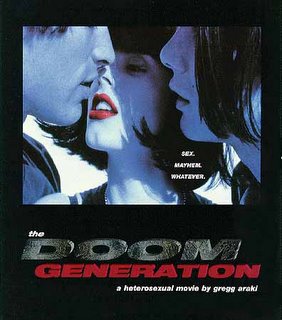 This is to further support my friend B’s defense of the early works of Gregg Araki, best known now for his critics’ darling Mysterious Skin; you can find his post here. Araki’s early works, as B stated, remain some of the most misunderstood films of the past decade. This problem may be due to the fact that, somehow, The Doom Generation reached an audience outside of those who could appreciate his work. Perhaps due to the nudity, box-artwork, tagline ("Sex. Violence. Whatever."), or the range of bizarre cameos, The Doom Generation fell into the wrong hands, and this is from where its notoriety stems. Camp can be a tricky element, and one can assume it won’t be understood by its entire audience. I know plenty of people that take Paul Verhoeven’s Starship Troopers at face value, either finding it incredibly stupid or thinking it works as a big-budget sci-fi/action flick. At heart, Starship Troopers is a criticism of war in the fashion of a Russian propaganda film. At your local Blockbuster, you can probably find The Doom Generation somewhere in the action section, further aiding to its misinterpretation.

While excessive, over-the-top violence with gore effects that rival some of Roger Corman’s early works and dialogue riddled with pop culture references flow throughout the film, these elements aren’t the dividing factors for his audience. Your average Joe might laugh at the silliness of the violence and might not pick up on the Cocteau Twins reference when one character calls another his “pearly dewdrop’s drop.” Instead, Araki’s characterization serves as the main dividing point. At least in The Doom Generation, we’re not meant to see this world through the eyes of any of the three central figures. As B expressed in his post, our world is defined by its opening moments: the hardcore club, the flames behind the “Welcome to Hell” sign, the Nine Inch Nails song. Amy, Jordan, and Xavier are simply the means to get the message across. Araki doesn’t hold contempt for these characters as a director like Todd Solondz might, nor does he throw unjustified adoration onto them. Their concerns are not individualistic but far broader; this film is about a generation, not about three people within it. Casting non-actors like James Duval and Rose McGowan (though both have had work post-Araki, no one would honestly consider them actors), Araki solidifies the purpose of this characterization.

Though The Doom Generation has been called misanthropic and distancing, I find it difficult to not see the combination of empathy and criticism. One could argue that the attention to detail (specifically the soundtrack, production design, and usage of effective cameos) in a film whose intention does not lie within the realms of historical accuracy or realism must suggest an empathy with its subject. I could argue the same case for Bruce LaBruce’s The Raspberry Reich. As anywhere, criticism does not directly equal denouncement. After violently escaping their attackers, Amy shows her first moment of sadness after they hit a dog in the road; we acknowledge her ridiculousness at the death of a helpless animal over the taking of human life. The characters do not meet their final destiny out of any malice on Araki’s part. The outside, “real” world that destroys them. It’s here where Amy’s grief over the dead dog comes back to haunt her. She cries about the dog, but is left speechless after her boyfriend is murdered.

I find both of your critical comments on "Doom Generation" fascinating.

Despite writing on film sometimes, my approach is often emotional rather than critical.

Araki's films mean a lot to me because of what they revealed to/in me. I first discovered Totally F***ed Up and The Living End on video as a teenager in 96 just when I was coming to terms with my own sexuality. I saw Three Bewildered People in the Night in Tokyo a few months later with a huge crowd of Japanese queer punks. These films were helpful in defining myself both in relation to a 'straight' world which felt alien, and to the so-called 'gay community' which felt worse.

They also helped define my taste in film in relation to the whole political and artistic spectrum of what was actually being made.

And later I got a chance to meet Jonathon Schaech and Gregg Araki and they confirmed what the films had shown me: that just as there was a film culture leftfield of the indie movement, itself on the left of Hollywood, there was a queer culture, leftfield of the gay community, itself on the left of the mainstream. To someone unpacking his identity like a christmas chemistry set, this was valuable (if now fairly obvious) information.

Araki's films are uneven, and their worth (to me at least) lies outside of their intrinsic qualities as works of cinema. But they're never less than fascinating.

PS: Has anyone tried to watch Nowhere after Mysterious Skin, i.e. understanding the alien abductions as metaphors for sexual abuse?